I recently received this note from reader John:

I am a consultant to cabinet manufacturers. I program their cabinet software to calculate and cutout their cabinet parts on CNC (computer numerical control) machines. A lot of cabinet companies create hoods that go over stoves that are curved on both sides and front. I need to calculate the joint of that curve as if it is laying flat. How do you calculate this?

John provided a picture of one of the typical hoods that he is talking about. 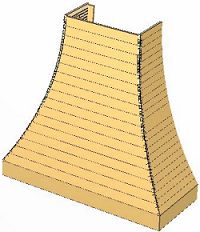 What he needs is a formula to plot the Y coordinate of the curve given the X or vice-versa.

This was an interesting problem that involved some actual "real world" applications of math.

The requirement was for a "curved side" with no other specifications, so I proceeded as follows, based on the picture he supplied.

I happen to have a Chinese lamp shade which also has curved sides and it's very similar to the image he sent, so I used that as a model to make sure what I had was OK. I like to work with concrete materials first to give me a better feel for what is going on.

I used a piece of paper to outline one side of the shade, then measured the side of the paper (laid flat) in 5 locations and using Cartesian coordinates, it looked like this: 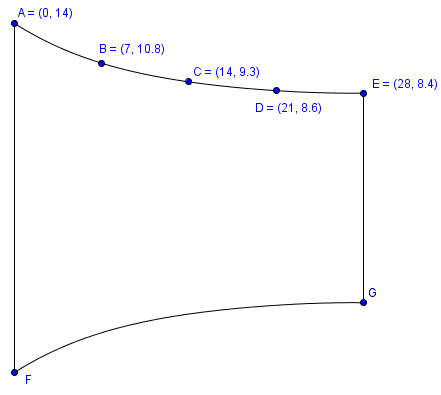 For the diagram above, I used my favorite tool for this kind of job, GeoGebra (a free open source tool.)

In Geogebra, it's simple to ask for a polynomial passing through the 5 points, using the following syntax:

While it was potentially a quartic (because it passes through 5 points), Geogebra decided a parabola would do the job:

NOTE 1: I moved the curve on its side because points AB are almost vertical otherwise, and that gives messy polynomials. It's much smoother if the curve is almost horizontal.

If we had proceeded with the curve in upright mode, the points would have looked like this: 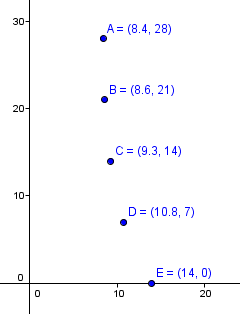 With the points almost vertical, the resulting polynomial is a quartic, and certainly not useful to us. (I have changed the vertical scale for this next graph). 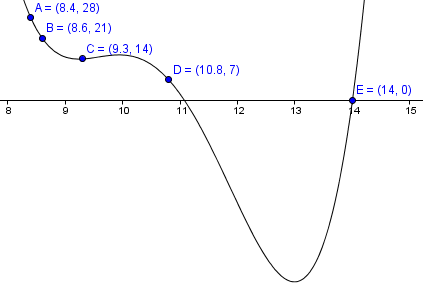 We don't get a smooth curve joining the 5 points.

NOTE 2: You can also use Microsoft Excel to find a polynomial for you as well. (See the bottom of the DJIA Graph page for the procedure).

Back to the problem.

So I printed out my curves on paper, and cut them out. The 4 shapes were like this: 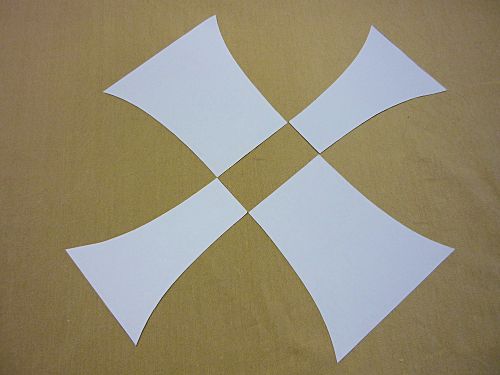 And the final mockup (using paper): 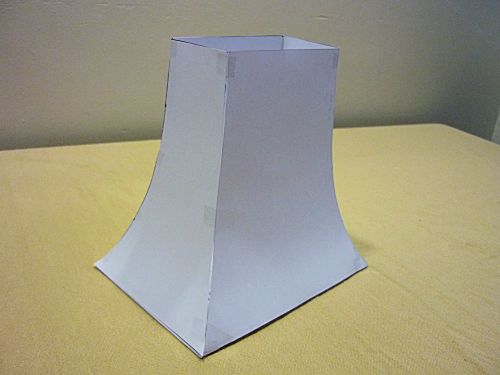 Yes, it's rough, but the joins appear to be all good (within the mm or so tolerance of my cutting and sticking...)

So one generic solution for the problem is a parabola:

As a side note, this problem reminded me of the shapes of Singapore's iconic Marina Bay Sands Hotel. (I live in Singapore). 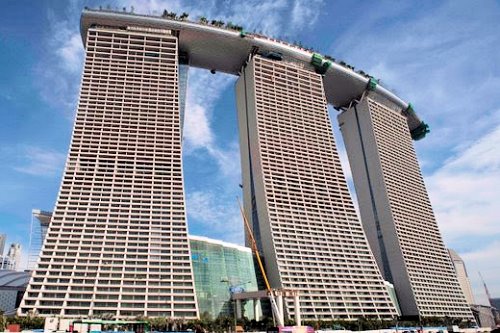 So we now have to figure out the equation of the joins for circular sides, when laid flat.

John also supplied some dimensions for a typical case. It will be 12 units high, and 9.37 units from the top join to the bottom join, in the horizontal direction, as follows: 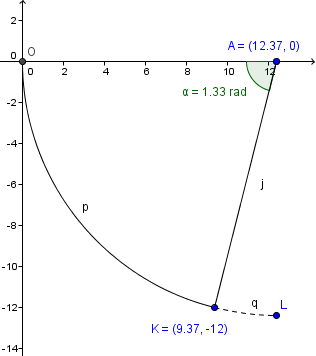 The curve at O is vertical, and the arc is 12 units in the vertical direction from O. When we calculate the arc length p, we find it is:

This leads us to consider the following possible solutions which represent the curved side laid flat (and once again rotated by 90° for the reasons given above). 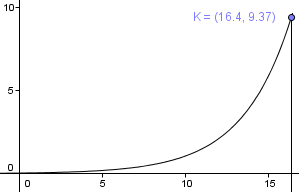 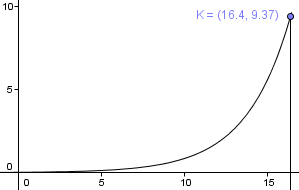 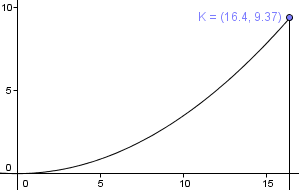 Which curve could it be? And, what is the equation of that curve? Remember, it has to fit exactly with the other curves that are at right angles to it, and give us a circular arc when joined.

After several failed experiments involving complicated attempts at projecting the curved surface onto a flat plane, I stepped back and observed the 3rd curve looks a lot like a parabola, and the other 2 looked like they weren't going to give us a circular curved surface. The useful paper, Unwrapping Curves from Cylinders and Cones, was the deciding factor.

Assuming now it will be parabolic, and given that it needs to pass through (16.4, 9.37), we can simply use the general form of a parabola:

Then solve for a by substituting :

I've left it in fraction form so we can more easily see where the general formula comes from later.

Based on the simple parabola, I cut out shapes as in the following. 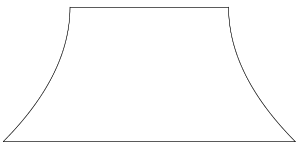 Here is the resulting range hood model made from paper. 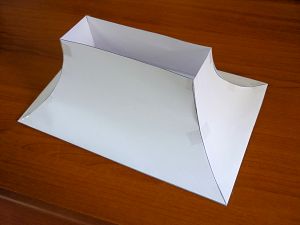 The height of the curved part is now 12 units (as required) and the distance from the bottom left point in the picture the the top of the curved join was just over 9 units, as required. (Of course, some tolerance is applied since we are working with paper.)

You can see when we view the model from the side that the curved edges are indeed circular arcs, and it's vertical at the top of the arc.

John wanted a general solution for the curve.

If the radius of the circular arc is given by r, and point K is (m,n) then the arc length will be:

The required curve will be:

I'll leave it as an exercise for the reader to prove we actually will get sides which are arcs of a circle when using a parabola. ^_^)

(1) Often the simplest answer is the best.

(2) The quadratic curve is very handy in math!