Happy Valentine's, everyone! Here's a mathematical interpretation of the ubiquitous symbol of love.

Did you ever consider the geometry of the idealised heart shape used in countless Valentine's messages? It's just a square rotated 45°, connected to 2 semicircles.

This article from the journal Nature includes an interesting application of space-filling curves to energy storage devices:

(b) Degree and roots of polynomial equations

The concepts behind polynomial equations are quite important in mathematics, but a lot of students get bogged down in the algebra, while not seeing the big picture

The rest of that chapter introduces the Remainder and Factor Theorems, which I've always felt were rather useless, since only a very limited subset of polynomial equations can be solved using those techniques (the degree has to be low, and the numbers have to be "nice" so factoring is easy. But what about the huge number of cases where the numbers don't lead to easy factoring by inspection (or trial and error)?

Of course we should sove such cases using computers!

Leonhard Euler was a brilliant Swiss mathematician who made many contributions to the fileds of physics, astronomy and engineering.

His famous identity, eiπ + 1 = 0, has captivated people (since it neatly involves seven fundamental mathematical symbols) and proved to be very useful for simplifying many mathematical processses.

THis page was a request from reader Owen.

(a) Map Projections on the Web

Every 2D map of the world has some distortion, the inevitable result of trying to project a 3-D object onto a 2-D plane. 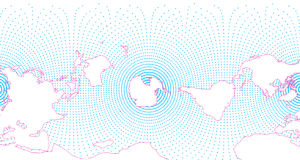 Some map types are better than others for preserving area, or shape, but none are prefect.

These could be good starting places for students who want to learn how to code, via interesting challenges.

Many of his designs were based on the geodesic sphere, an imaginary tesellation of a sphere into triangular pieces. 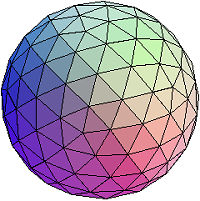 His Dymaxion Map is a projection based on the above sphere (actually basesd on an icosahedron).

See also the results of a 2013 competition to re-invent Fuller's map:

(a) Speed of light

(b) The joyful, perplexing world of puzzle hunts

One takeaway is we don't give students enough opportunity to create the problems in math class - they learn a lot by doing so!

The puzzle in the last IntMath Newsletter asked "Who dies" in a scenario involving a rolling stone. Several conflicting answers were submitted. I added my own interpretation, which concludes D dies, but C may just have had a lucky day. Further comments are welcome!

Find the least two positive integers having the remainders 2, 3, 2 when divided by 3, 5, 7 respectively.

Fewer people are meeting the love of their life in a "natural" way and are turning to apps to make connections for them. Algorithms continue to take over our lives and we all need to have a better understanding of the math behind such algorithms.