Desmos is a brilliant free graphing tool, and this would be a good way for students to learn how to use it.

This would be a great opportunity to learn about what's going on in the world of computer math. It's to be held at Bentley University, Massachusetts, and financial aid is possible.

I recently read the book Empty Planet: The Shock of Global Population Decline by D. Bricker and J. Ibbitson, which argues that one of our problems this century won't be overpopulation, rather it will be falling populations.

Already there are several countries which are going through population declines, such as Russia, Japan and South Korea. China's fertility rate of 1.5 means it's probably going to see peak population as soon as 2023.

Here is a list of countries whose demographics I found particularly interesting:

Some of these countries don't have a population "pyramid" at all (the "normal" pattern where there are more children than adults, forming a triangle) and some have a very narrow base (like the Singapore one I used in the image above). Already a lot of schools have been closed or merged as the school-age cohort size drops in Singapore.

Also, don't miss the data on coal reserves and use which explains most countries' reluctance to let it go.

(a) Using polynomials for trendlines

It's challenging to interpret the counts of those affected by COVID-19. In the article Here’s Why There Are So Few Reported Covid-19 Fatalities Today, the authors added a (very light) polynomial line of best fit to the chart of coronavirus data.

The polynomial appears to be a quadratic (highest power 2) or cubic (power 3) polynomial. The problem is (in their graph) the portion near the start of the outbreak is not so good as it suggests the number of cases was above zero then dropped at the beginning.

I had another go (using Google Sheets) and produced the following, using a quartic (highest power 4) and it appears to be a very close fit, and it behaves well near 0, the start of the epidemic. 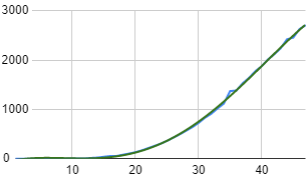 Actually, most populations (including diseases) don't tend to follow a polynomial path (which will continue to grow forever), rather they have the shape of the logistic equation, which you can see in action in this page: Predicting AIDS. The hope then, of course, is that it will follow an exponential decay pattern and die off.

People behave irrationally when these things happen. The actions of panicking people are usually more dangerous than the disease itself. Please call out anyone who exhibits prejudice against Chinese people (including boycotting their businesses for no reason). We can and must be better than that. 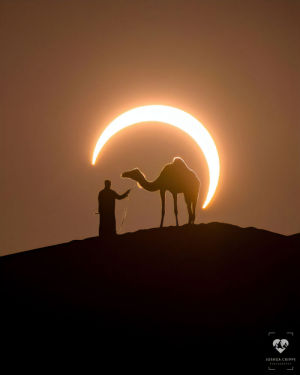 Former engineer Joshua Cripps made use of the app Photopills which helps you plan that perfect nature shot involving the moon, sun, stars or planets.

Read how he calculated the exact distance he needed to be from the sand dune and the camel — using the angle of the sun from the horizon (6.5o) — to create this superb photograph.

(a) Do politics make us irrational?

The video helps explain some of the polarization we see in many countries today. Here's a quote:

"We’re strongly motivated to defend our group identities, protecting both our sense of self and our social communities. But this becomes a problem when the group’s beliefs are at odds with reality. People are often more motivated to maintain a positive relationship with their group than perceive the world accurately."

If more people would stop getting their "news" from anti-social media, and did more independent fact checking, we'd all be heading in a better direction.

(b) Movies based on math

Here's a list of movies where the main character(s) are mathematicians. If you can find any of these, they're well worth a look.

Do you have any other math-based movies to recommend? You can do so here.

We've got 2 puzzle solutions to discuss.

(i) The puzzle in the December IntMath Newsletter involved a substitution cipher. A correct answer was provided by Thomas.

Here is the solution (where 4 and 6 are interchangeable):

(ii) The puzzle in the last Newsletter (January) involved 3 runners. Correct solutions with sufficient working (and as usual, an interesting variety of approaches) were provided by: Eamon, Trevor, Saikrishna, Gerard and Thomas.

What's the distance between the poles? 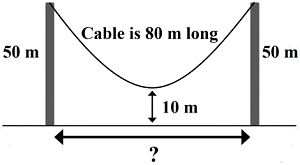 December was the driest on record [Source], leading to the shocking bushfires experienced over much of the south east of the country . 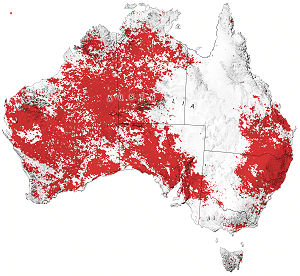 In Newly released satellite data reveals the patterns of record warmth in 2019 there are several charts indicating where things are heating up worldwide.

The window for doing anything meaningful is closing. Who are you going to vote for?