While producing the above graph, I came across the usual inaccuracies that arise when floating point numbes are involved.

Desmos is one of the best free online graphing tools. Apart from allowing you to graph functions easily via an intuitive math input system, it's also possible to add sliders to graphs (allowing you to explore the effect of changing parameters). You can graph tables of data and also produce quadratic and exponential regressions.

Desmos is also available on iOS and Android devices.

The teacher-designed math activities provide situations where students can learn math vocabulary and concepts, in a visual context.

It's a great way to engage students by getting them involved in talking about math, and asking questions about math.

Another interesting one is Water Line, where students need to figure out the graph of height versus time for filling various container shapes with water. This is good for developing essential mathematical modeling skills.

The puzzle in the last IntMath Newsletter asked what was wrong with two protractors.

Here is a more detailed analysis.

The first problem with both of the protractors is they are not transparent. It is possible to make a metal or plastic one without being transparent, but it makes it harder to use. The angle you are measuring has to be at least the length of the radius of the protractor, otherwise you have to extend the arms of the angle. As a manufacturer, you need to decide where to place the origin point. Both protractors had errors.

In this case, the origin point is placed at the bottom middle of the protractor. This is good in that we can place that point on our angle's vertex. But the 0° and 180° markings should be in line with that origin point. The blue one fails in this respect. The only angle that will be correctly measured is 90°.

I took the photo of the protractor and overlaid it in my image editing software. I then measured the angles as follows. 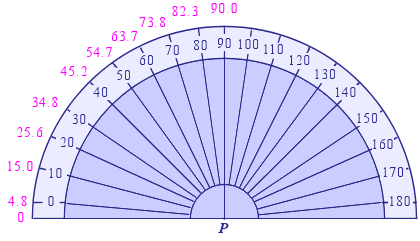 One would expect 0° to be the most inaccurate, then as the angles get bigger, the error should reduce. However, it wasn't even a linear relationship. You can actually see the gap from 30° to 40° is larger than the rest.

All in all, a distrastrous measuring instrument.

The key problem with this protractor is that it's impossible to see the vertex of the angle you are trying to meaure (or construct).

You would need to drill a hole at the point P for it to work properly. Once you've done that, the angles should be reasonably accurate.

Of course, the manufacturer should have drilled a hole there. No wonder the students made many mistrakes while using these protractors!

Find 3 integers that form a geometric progression if their sum is 21 and the sum of their reciprocals is 7/12. 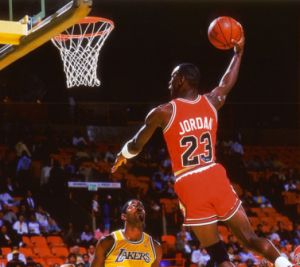 Basketballer Michael Jordan, regarded as one of the greatest basketballers of all time, had this to say about his success.

I've missed 3000 shots. Twenty-six times the game-winning shot has been trusted to me, and I've missed. I've lost over 300 games. I've failed over and over and over again, and that is why I've succeeded. [Michael Jordan]