The Desmos Graphing Calculator is a great tool for exploring mathematics concepts. I recently came across the section Learn Desmos, where you can:

(b) John Mighton and JUMP Math

Educators despair over the best way to teach mathematics. Annie Murphy Paul wrote an enthusiastic piece this week about John Mighton and JUMP Math, in "Secrets of a Math Master".

According to the JUMP Math site:

JUMP Math draws on the latest research in cognitive science to build upon the best of math programs from around the world.

While I'm a big fan of technology, I can undestand the growing popularity of hands-on "maker faire" projects (and adult coloring-in books, too). We become too detached from the physical world the more we are wedded to our devices.

This week I had the pleasure of watching The Man Who Knew Infinity, the story of the brilliant Indian mathematician Srinivasa Ramanujan.

With no formal mathematical training, Ramanujan's mathematical breakthroughs were just extraordinary. He could "see" amazing new (and correct) formulas (mostly in number theory topics), similar to the way the great composers could "hear" their compositions before they were ever written down.

I especially enjoyed the movie having visited Cambridge last year, and can understand the pleasure Ramanujan gained from walking the same corridors as Isaac Newton did.

Here are some photos (from that trip) of places that appear in the movie: 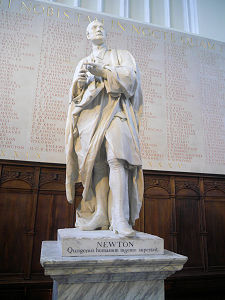 Statue of Isaac Newton in the Chapel, Trinity College, Cambridge 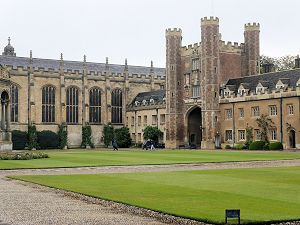 I recommend The Man Who Knew Infinity.

The puzzle in the last IntMath Newsletter asked about converting a fraction into unit fractions, used by the ancient Egyptians.

Correct answers with sufficient explanation (and with the shortest answer of 3 unit fractions) were given by: ct, Don, Rika, Ben and Jess.

Others had longer, but still correct answers. Thomas explained where his 4 unit fractions came from, and Nour did a good job of explaining all her 8 unit fractions.

I suspect the Egyptians always aimed to use the least unit fractions possible.

A note on intuition: In the movie The Man Who Knew Infinity, there's a scene where Hardy asks Ramanujan where his extraordinary formulas come from. Ramanujan, much to the chagrin of the atheist Hardy, says his gods speak to him. Hardy insisted Ramanujan write rigorous proofs for his formulas, stating we can "only believe something we can prove".

Similarly, the IntMath Newsletter encourages those of you who respond to the Math Puzzles to give explanations and insight into the thinking involved. This helps later readers of your solutions.

Such was Ramanujan's love of numbers, that his Cambridge confidant John Littlewood (best known for his achievements in analysis, number theory and differential equations) said:

Every positive integer is one of Ramanujan's personal friends.