(a) 3D animation of Tesla's Map to Multiplication

(b) The real story behind the Tesla Map to Multiplication

Better Explained covers a wide range of math topics using intuitive and easy-to-follow methods, in some cases with interactive activities. Here are some example pages:

3. Math in the news: China's own Good Will Hunting?

(A Carmichael number appears to be a prime, based on Fermat's Little Theorem, but turns out to be composite. The first Carnichael number is 561.)

The story is reminiscent of S. Ramanujan's rise to academic prominence with no formal background, and of the movie Good Will Hunting. 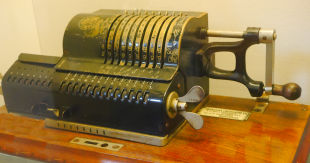 I came across this 120 year-old calculator in a museum in Cambridge last year. Here's what the caption said:

This machine can mechanically calculate sums using a complex system of pinwheels coupled with geared carry mechanisms and a counter. Users would input numbers and
turn the handle clockwise for addition and multiplication or counter-clockwise for subtraction and division.

Although the principle of such an arithmetic machine was described by Gottfried Leibniz in 1685, it was only in 1873 that there was a practical, affordable design suitable for mass production.

The owner of this particular device was George Udny Yule, appointed Cambridge's first University Lecturer in statistics in 1912.

The puzzle in the last IntMath Newsletter (28 Jun) involved buying a combination of plants.

Correct answers with sufficient explanation (which included reasoning) were given by: Γιώργος, Kai, Nour, Lidia, Don, Rasheed, Helena and Chris.

Some of the solutions included the trivial case of buying 100 yams, but the wording of the question ("I grab a selection of plants...", and "How many of each type ...") suggest the trivial answer shouldn't be included.

It's unfortunate that most school mathematics questions have one clear correct answer, usually arranged that way so it's easier to grade and there is less controversy about fairness. But in the real world, most problems are "fuzzy" and multi-variable, often with several ways to do it and several outcomes. Students should get more experience with such open-ended problems. I think it's good to mention the trivial case as one possible outcome, but I don't think we would include it as a solution in this case.

The 1st of January 1981 was a Thursday. What day of the week was the first day of the 20th century?

Inequality of wealth distribution is no doubt a big part of recent unfortunate events (in the eyes of many) like Brexit, the shift to the right in Europe and the rise of Donald Trump. Here's a perspective that's worth pondering: