The real story behind the Tesla Map to Multiplication chart

I recently found this Map to Multiplication chart and found it fascinating. It's purportedly by the brilliant inventor Nikola Tesla.

I developed a 3D interactive applet which shows more clearly the patterns found in this multiplication chart.

The "Map to Multiplication" 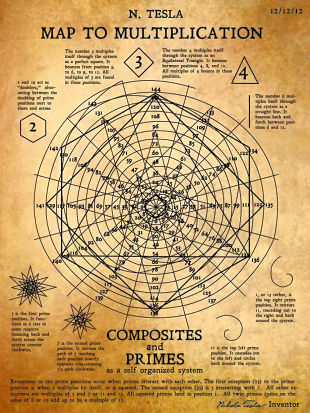 Around the edge of the spiral the author has indicated the patterns which form by succesively multiplying various numbers.

For example, the multiples of 2 form a hexagon shape as we go around the spiral: 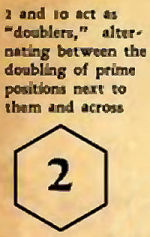 This image gives a clearer view of the hexagon resulting from successive multiples of 2: 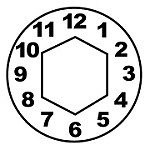 Multiples of 3 give us diamonds:

Here is that diamond on a clock face: 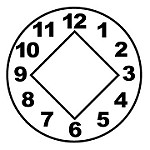 Multiples of 5 (when we go all the way out to 144) give us a more complex star shape: 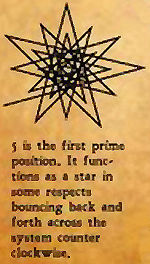 The prime 11 spirals out from the center: 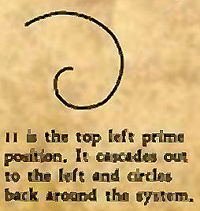 But it wasn't by Tesla!

I was initially fooled by the chart. It certainly looks like something Tesla may have produced, and the paper it's printed on (or appears to be printed on) is suitably yellowed.

In reality, math teacher Joey Grether originally developed the chart for his children. He tried to promote it via 12xspiral but with little success.

So he cheekily decided to create a hoax, making it look like the chart was by Nikola Tesla. [His post has since been taken down.].

There's an article about Joey (by Maria Droujkova) here: Exploring the spiral multiplication table, where you can see the original Grether's Spiral diagram.

Also see this Reddit entry, which alerted me to the scam.

Don't always believe what you read - even though it looks plausible.

Now head on over and check out my 3D animation of the Grether Sprial.