The applet now uses a different back-end meaning that it's now mobile-friendly and somewhat more convincing.

Using the applet you can explore the conic shapes that occur when you slice a double cone by a plane at various angles and positions.

You will get either a circle, ellipse, parabola or hyperbola. Such curves are called conic sections, since they are the result of slicing a cone with a plane.

When the plane's angle is less than the cone's side angle, we get an ellipse, as follows: 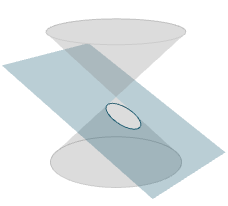 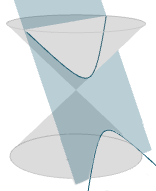 At various extremeties, you get a degenerate conic, which is either a:

Here's an example of the latter case: 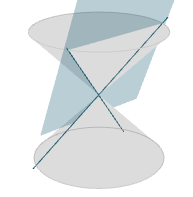 I developed the applet using the brilliant Three.js library by MrDoob.

Constructing each of the conic section curves should have been a straightforward process of finding the intersection between the plane (at various angles) and the cone(s), then looping around the resulting curve at small intervals and joining the points.

However, each conic type threw up its own challenges. For example, I could draw the hyperbolas on the x-y (horizontal) plane, then rotate them at the correct angle and then move them into position, but the other curves didn't play nicely with that approach and I had to try all sorts of different ways.

The "fun" issue is that eah situation was multi-variable. That is, by being able to move the plane left and right, and up and down, and at different angles, a lot of testing was necessary to make sure it all worked as intended.

There's always a lot of mathematical thinking involved in creating these interactive applets, as there is for creating any interactive visual app, especially games.

For the current conic sections applet, I needed to use and calculate: