I recently added a new graph applet which helps you explore the algorithm used in Newton's Method.

It's likely you've seen Psy's Gangnam Style video, since it's been watched over 2 billion times.

The number 2 billion is significant because the YouTube engineers had to change the integer type for their viewer number system as a result.

Here's a post they wrote on Google+ at the time: 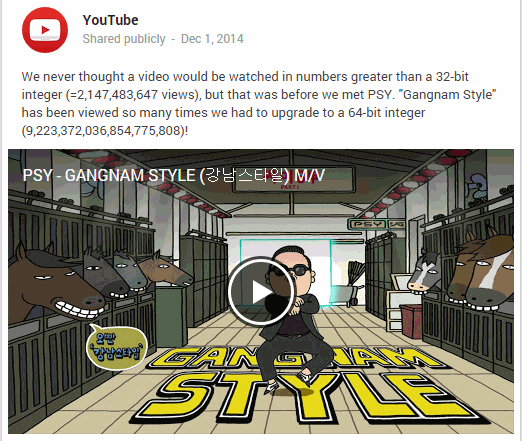 In fact, the number 2,147,483,647 is important in computer programming, because it's the limit of what are called 32-bit integers. YouTube could see they were going to have a problem as the number of views of Psy's video approached the 2 billion mark.

The larger your numbers, of course, it takes more storage in databases, and more computer memory when manipulating those numbers.

Also, YouTube started in the days when 32-bit computer architecture was common. This meant that 32-bit numbers (the ones with an upper limit of 2 billion) were relatively efficiently handled in less steps, and with less memory, than 64 bit numbers.

Now that 64-bit is the standard, it was logical for YouTube to change the integer type for their viewer counter to 64-bit. It meant that any large number would be more correctly represented. So now, any YouTube video can be watched up to 9,223,372,036,854,775,807 times, the highest possible value with a 64-bit number. Time will tell if this will ever be breached.

Odd things happen near the limits

In the article Floating Point Numbers Aren't Real, (part of the series (97 Things Every Programmer Should Know), we learn that odd things happen when we use computers to perform simple arithmetic near the cut-off value for a 32-bit integer.

Another oddity is the following.

We should get 8, right? But in fact, the computer outputs 7.

When we find the nearest integer below that value, of course, it's 7.

I came across some of these issues when developing the Newton's Method graph applet, as explained next.

In the new interactive graph, you'll notice in the first example presented, f(x) = 2x2 − x − 2, that the first few approximations are as follows:

But in this example,

Substituting in the formula for Newton's Method, our next approximation should be:

This is a trap in all numerical computing. I'm using javascript, and internally, the computer is using floating point numbers.

When our numbers are very small (like in my example) or very large (as in the case of Gangnam Style), there will always be inaccuracies due to floating point numbers. We should always build in error checking, and if the error is beyond what is acceptable, we need to implement an algorithm to correct for it.

Most computer algorithms (used by Matlab, Mathematica and so on), have such checking algorithms and so generally produce a better result.

It's always good to be aware of how computers represent numbers. There are times when we get unexpected results, and we need to know the limitations of the algorithm we are using.