Predicting the Spread of AIDS 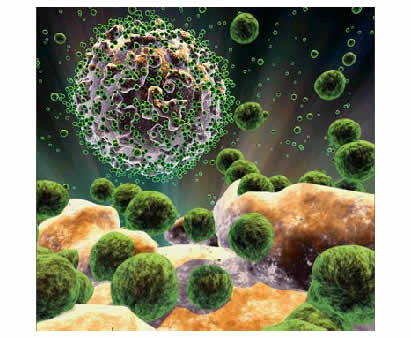 Populations usually grow in an exponential fashion at first:

However, populations do not continue to grow forever, because food, water and other resources get used up over time. Differential equations are used to predict populations of people, animals, bacteria and viruses that are being affected by external events.

A = number of people affected by the virus at time t,

P = the total population (a constant), and

c is a constant,

then the rate of growth of the virus at time t is given by the differential equation:

The term `cPA` is the growth term and `-cA^2` is the inhibition term.

AIDS is spreading through a city of 50,000 people who take no precautions. The virus was brought to the town by 100 people and it was found that 1000 people were infected after 10 weeks. How long will it take for half of the population to be infected?

We answer the first part of the problem here.

[We'll see how to solve this kind of problem in the Separation of Variables page, later in this chapter.]

So now we can substitute and solve for `c`:

So substituting this value of c into the expression for A(t) gives us:

So the number affected at time t is given by:

The graph of the number of people, `A(t)`, affected by AIDS after t years is:

S-shaped logistic growth of a population at time `t`.

We see in the graph the S-shaped curve which the logistic equation can take.

Now to find how long it takes for half the population (25,000) to be infected:

So we conclude that half of the population will be infected after about 27 weeks (marked on the graph above).

There is a strong bias towards men acquiring AIDS, with around 95% of the cases being male.

Data Sources: Dept of Health and Ageing, Australia, and Avert.

We see that the data roughly follows the expected S-shaped logistic equation curve. The decrease in growth from the late 1990s is largely due to suppressant drugs and education.

Let's now move on to see what differential equations are and then learn how to solve them.