8. Damping and the Natural Response in RLC Circuits 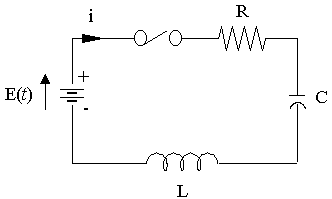 Consider a series RLC circuit (one that has a resistor, an inductor and a capacitor) with a constant driving electro-motive force (emf) E. The current equation for the circuit is

This is a second order linear homogeneous equation.

Its corresponding auxiliary equation is

`alpha=R/(2L)` is called the damping coefficient of the circuit

`omega_0 = sqrt(1/(LC)`is the resonant frequency of the circuit.

m1 and m2 are called the natural frequencies of the circuit.

The nature of the current will depend on the relationship between R, L and C.

There are three possibilities:

Here both m1 and m2 are real, distinct and negative. The general solution is given by

The motion (current) is not oscillatory, and the vibration returns to equilibrium.

Here the roots are negative, real and equal,

The general solution is given by

The vibration (current) returns to equilibrium in the minimum time and there is just enough damping to prevent oscillation.

Here the roots are complex where

The general solution is given by

In this case, the motion (current) is oscillatory and the amplitude decreases exponentially, bounded by

as we can see in the diagram above.

In a series RCL circuit driven by a constant emf, the natural response of the circuit is given by

State the nature of response of the current and hence solve for i.

Two ways of solving this problem are shown here. You can choose whichever one makes more sense to you, or seems easiest.

We will solve this in the same way as the previous section, 2nd Order Linear DEs.

The response is critically damped, since the roots are equal.

So we can now write:

Using the variables given in the damping theory above:

This is the same solution we have using Alternative 1. The rest of the solution (finding A and B) will be identical.

We need to set up the 2nd order DE with initial conditions as follows.

The graph of our solution is:

The wave action of a tsunami can be modeled using a system of coupled partial differential equations. Read more »