As we continue to collect and create vast amounts of digital data, we will need more people with the skills to make sense of it all. And there are some great tools in this collection to help with that.

I've spent a few hours playing in this collection. Some of my favorites include:

There is a lot to like here, and some great tools that we should be teaching in schools.

UPDATE: It seems Mathdisk has disappeared. As it was Flash-based, it's usefulness is now questionable. This is what I said about it:

MathDisk is a new 2-D and 3-D grapher. You can freely create graphs, and free registration allows you to save or share your creations.

There are some interesting pre-built examples in the Gallery, including:

MathDisk is Flash-based, so it won't work on iPad or most other tablets. However, it would be good for Interactive Whiteboards.

Do you use math software (like Geogebra, Matlab, Scientific Notebook, Mathematica, or Wolfram|Alpha)?

I have never used math software: 56%

I actually ran the same poll question in Nov 2007 and asked it again to see if the situation had improved. The results were almost exactly the same! (In 2007, 54% said they never used math software.)

Of course, I don't know who answered the poll on each occasion. It is quite possible there are no computers available in those respondents' schools. However, as time goes on, more people have access to computers and the use of math software should go up.

This is important because all math students should learn how to use math software. In the workplace they won't be doing pages of algebra using pen and paper - they will use appropriate tools to do it. Math software also changes the math we should learn. A lot of it becomes redundant when we have powerful math tools at our disposal.

Latest poll: The latest poll asks readers about their music tastes while studying math. You can answer on any page in IntMath.com

(a) Solution for last puzzle

Last Newsletter's puzzle was to find the radius of a circular roadway.

The best correct solutions (because they showed clear working) were by one of Aravind's students (complete with a great diagram) and Jegor. Sai Krishna also had the correct answer.

Metric system: One person responded to that puzzle with a strong condemnation of the metric system.

I totally disagree with his assertion that the confusing and user-unfriendly British system (which I grew up with) is in any way better than the simple and easy to use Metric System. Most of the world has already adopted metric measures. It's about time the USA joined the rest of us.

(b) An older, unsolved puzzle - solved at last!

Back in the 27 Oct 2011 Newsletter, I asked the following question, and nobody attempted an answer at the time.

Here is a coded message. Can you figure out what it says?

Reader Jegor was keen to figure it out, so I gave him the hint that the code was built using matrices. He successfully solved it.

Try to solve it yourself before looking at Jegor's correct solution here.

It takes 852 digits to number the pages of a particular book consecutively.

(i) How many pages are there?

(ii) How many times is the digit 7 printed?

In this Newsletter, I've talked quite a bit about the importance of moving with the times when it comes to technology in math. I thought the following story of Acu-Math is worth repeating.

For those who have never seen a slide rule, it was used as the main type of mechanical calculator from the 1600s until the 1970s. 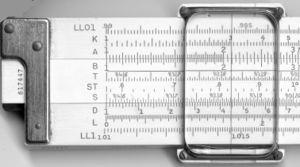 In the 1970s, Acu-Math was one of the world's best-known slide rule manufacturers.

Why have you never heard of Acu-Math? Because they were replaced by companies like Hewlett-Packard and Texas Instruments -- companies that launched the pocket calculator industry.

But if they'd defined their companies as "manufacturers of tools that help people do mathematical calculations," then they would have constantly been looking for new ways to meet customer needs.

Instead, they defined their company too narrowly.

The result was that when the price of micro-chips dropped low enough to be put into personal calculators, HP and Texas Instruments swept up their customers with new and better tools.

We're in a similar space now. Cheap math software promises to change a lot of what we do in math class, but there is amazing resistance to it. We are using inappropriate and old-fashioned methods for "helping people do mathematical calculations". Are we in danger of becoming the next Acu-Math?