This one is mostly for teachers, but math students should also find something interesting here.

TED (the place where the world's great thinkers get us to re-evaluate the way we look at the world) recently released TED-ED.

TED-ED is a collection of "Lessons worth sharing". There are lesson plans built around interesting TED talks, and you can either use those lessons, modify them to your own needs, or create a completely new lesson based on the talk.

"Flipping" your lesson involves getting students to learn some things before the actual in-class lesson. This allows students more time to process the concepts during class time, rather than hearing the concepts for the first time. Flipping gained a lot of momentum with the growth of resources like the Khan Academy.

These FAQs explain the TED-ED concept.

Here is the Math Category

There are now over 3000 people following IntMath on Twitter! The 3,000th follower was a design engineer.

There are many good people sharing educational messages and resources there. It's a great place for getting to know people and for sharing interesting finds.

Why don't you join us?

A big thank you to all those who helped out in the recent IntMath image conversion project. There were a few thousand images converted and now it's all done.

I'm in the process now of removing the old images and replacing them with the new ASCIIMathML-produced, MathJax output equivalents.

You an see some examples of converted images in the math on this page:

Several people wrote in to answer the last puzzle about numbers. The correct answers were 41 and 50. Great to see reasons given for the answers!

Line ABCD is a diameter of a circle whose radius is r. Length AB = BC = CD. Semicircles are drawn on AB and BD to create the shaded figure as shown. 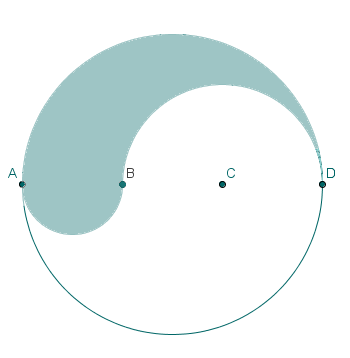 What is the perimeter of the shaded figure?

Lee Iacocca, colorful chairman of Chrysler Motors for many years, was named one of the top American CEOs of all time. The following quote could apply to what we do with our math knowledge:

Apply yourself. Get all the education you can, but then, by God, do something. Don't just stand there, make it happen. [Lee Iacocca]