First, let's investigate the properties of an orbiting body.

In the following graph, the green ball represents the Earth rotating around the (red) Sun, which is at a focus of the ellipse.

This is greatly exaggerated so you can see what is going on.

Consider how fast the sun would appear to be moving when we are close to it, compared to when we are way out near the second focus of the ellipse (labeled F2.)

[In fact, the Earth's orbit around the sun is very close to a circle, but it is still elliptical. See more on the Ellipse.]

Many of us don't take much notice of the motion of the sun, moon or planets. (Let's face it - most of us live in places that have bad air and light pollution so we can hardly see the sky). 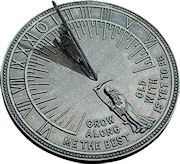 Consequently, we assume the Earth's motion around the sun is uniform and that it takes exactly 24 hours for the sun to come back to the same spot above us each day.

But this is not so. There is as much as 30 minutes variation between the position of the sun relative to the stars at the same time of day, throughout the year. That is, the sun can be "behind" by as much as 14 min 6 sec (around 12 February each year) and up to 16 min 33 sec "ahead" (around 3rd Nov each year).

There are 2 reasons why this is so:

If the Earth rotated around the sun in a perfect circle and there was no tilt on the Earth's axis, we would see the sun overhead in exactly the same position every day.

The ancient Greeks knew about this issue but because they didn't have accurate clocks, they were not too concerned. By the 17th century, with the invention of pendulum clocks, knowing where the sun should be at any time of the year became critical for accuracy in navigation at sea.

The Equation of Time takes the above 2 factors into consideration and can tell us how far ahead or behind the sun will be relative to the stars.

An explicit function that is a good approximation to the Equation of Time is as follows, where d is the day of the year and the resulting value is in terms of minutes of variation):

This is made up of 2 components:

This is also known as the Effect of Orbit Eccentricity. More strictly, adjusting for the correct period, its equation is:

This contributes 9.873 minutes to the variation in the sun's position, and has period half of one year:

This is also called the Effect of Obliquity. Once again, adjusting for the correct period, its equation more correctly is:

When the 2 components are added together, we obtain:

The Equation of Time is a neat real-life application of conic sections (the Ellipse) and Composite Trigonometric Curves.

See the 42 Comments below.

42 Comments on “The Equation of Time”