H1N1 and the Logistic Equation

The Northern Hemisphere is bracing for an outbreak of H1N1 flu this winter. 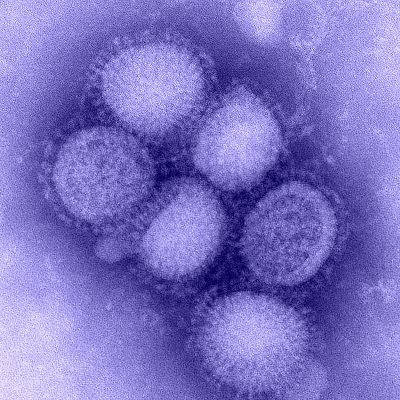 According to the World Health Organization (WHO):

The H1N1 virus is still in an exponential growth phase (it grows faster as time goes on). But populations don’t continue to increase exponentially forever. For example, we all know that rabbits breed very quickly, but if the supply of grass runs out, this will put a limit on their population growth.

Likewise with diseases, there is a limit to their growth. If the disease kills too many people, it will have nowhere to go and its growth will taper off over time and the number of new people affected will eventually drop.

Such a situation can be described by the Logistic Equation. This equation describes the case where a population initially grows in an exponential fashion, then tapers off to some constant value.

The graph of this logistic equation has an elongated “S” shape, as follows: 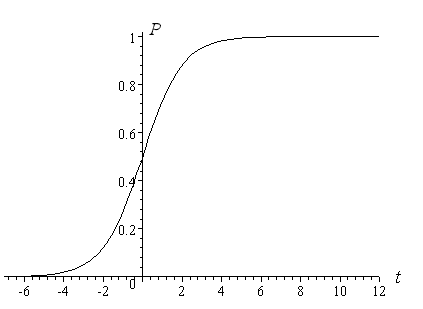 Notice that the early portion of the graph (up to t = 0) represents exponential growth, while from there, the growth tapers off and eventually the value of P becomes a constant value of 1.

The above model is too simple for discussing H1N1 (for starters, we can't have fractional populations). A more useful form of the logistic equation is:

The variables in the above equation are as follows:

An example for the H1N1 outbreak might be as follows. Say there is a town with 1000 people and one day, 20 people wake up with H1N1. The virus eventually affects everyone in the town.

So P0 = 20 people affected, K = 1000 and we have (say) r = 0.2. Substituting these into the logistics equation and simplifying gives the following expression for the number of people affected by H1N1 at time t (in days):

Here is the graph of the situation: 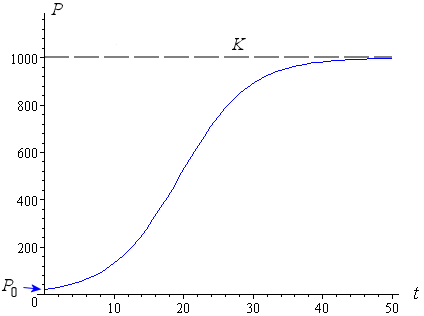 We see that eventually everyone in the town is affected after about 50 days.

Mexico first noticed an outbreak of H1N1 in Mar 2009. The number of cases grew rapidly to 26 Apr, then rapidly declined. 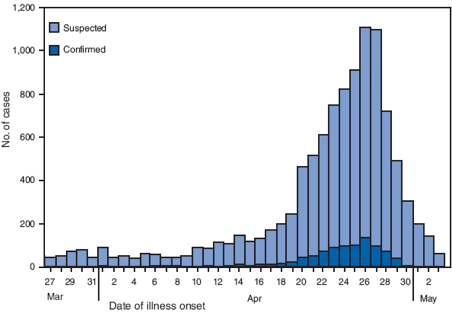 If we take cumulative totals for the new cases (add each new number of cases to the total so far) and graph the result over the 53 worst days of the outbreak, we obtain the following. 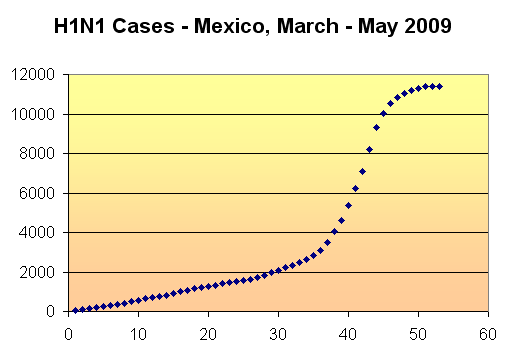 At first, the growth is somewhat linear (up to day 30), then it resembles the logistic equation curve from then on.

You can see more on this topic here: Predicting the spread of AIDS using differential equations.

16 Comments on “H1N1 and the Logistic Equation”