How to find the equation of a logarithm function from its graph?

First, let's revise some of the "typical" shapes a logarithm curve can take. If you're not sure about the background, see the chapter Exponential and Logarithmic Functions.

A logarithm graph of the form y = log10(x) has the following shape: 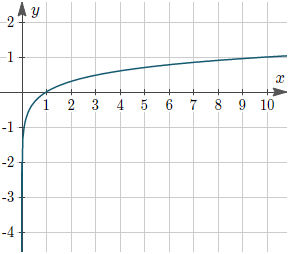 The following graph shows the cases when the base is: 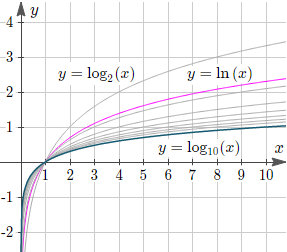 Finding the base from the graph

We can find the base of the logarithm as long as we know one point on the graph. Here, we assume the curve hasn't been shifted in any way from the "standard" logarithm curve, which always passes through (1, 0). 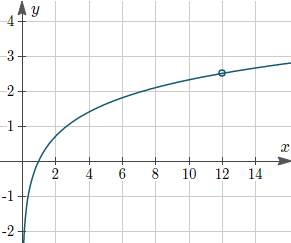 Example 1: Find the base

To find the base, we just need to apply the basic logarithm identity:

Applying this, we have:

So the base of the given logarithm equation is 2.7.

The general form for this curve is:

If we multiply the log term, we elongate (or compress) the graph in the vertical direction. In this next graph, we see from the top-most curve: 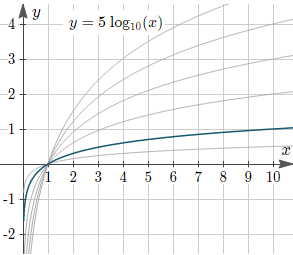 While this may look similar to Figure 2 above, it is quite a different situation.

The minus sign before the "x" has the effect of reflecting the curve in the y-axis. We get a vertical mirror image of the curve we saw in Figure 1. 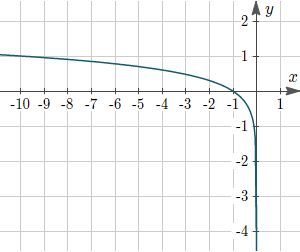 The minus sign before the "log(x)" has the effect of reflecting the curve in the x-axis. We get a mirror image horizontally. 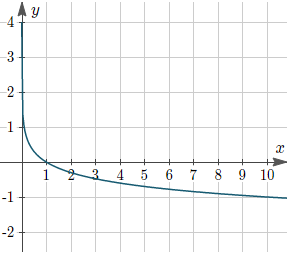 We get a mirror image across both the vertical and horizontal axes. 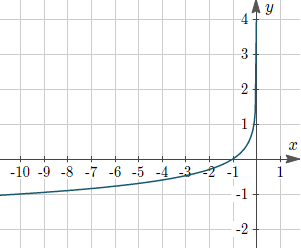 NOTE: Compare Figure 6 to the graph we saw in Graphs of Logarithmic and Exponential Functions, where we learned that the exponential curve is the reflection of the logarithmic function in the line y = x. This is not the same situation as Figure 1 compared to Figure 6.

Next, we'll see what happens when we come across logarithm graphs that do not pass neatly though (1, 0) or (−1, 0) as in the cases we've just seen.

Shifting the logarithm function up or down

We introduce a new formula,

The c-value (a constant) will move the graph up if c is positive and down if c is negative. 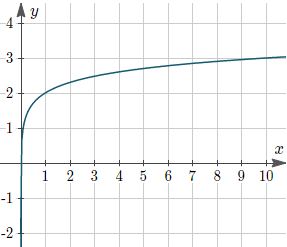 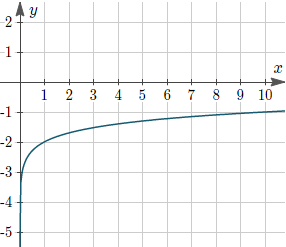 We introduce another new formula, where we've replaced x with (x + a):

The "a" will have the effect of shifting the logarithm curve right if a is negative, and to the left if a is positive. 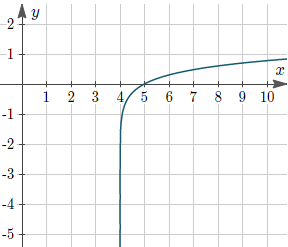 The curve in Figure 1 has been shifted to the right by 4 units. 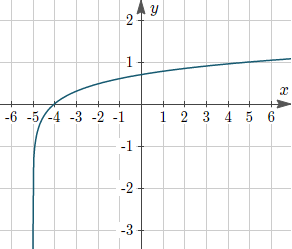 Let's pull what we've learned so far into an example.

Question: Find the equation of the logarithm function (base 10) for the following curve. 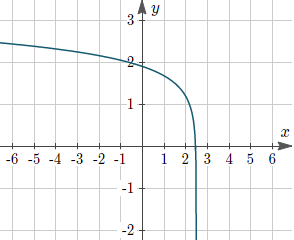 Answer: We observe the shape of this curve to be closest to Figure 4, which was y = log10(−x).

We'll assume the general equation is:

Here's an interim graph, where I've moved the curve 2.5 units left so I can easily see how high or low the graph is: 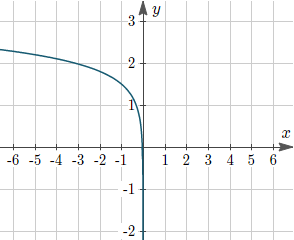 So the required equation is

Determining the equation of a logarithmic function from data

There are many computer packages (SPSS, Excel, etc) that can determine a "best fit" curve for a given set of data. But for the sake of explaining how to determine an unknown logarithmic function from its data plot, let's take a look at this example (one which is close to my heart).

The experiment: A group of people are asked to learn a list of random words. They are tested immediately, then again after some time has elapsed, and then repeatedly over longer time spans. As expected, the number of words they remember correctly diminishes over time.

The average data is plotted over time as follows, where the horizontal axis is time, and the vertical axis is the proportion of the words they got right. (This is the famous Ebbinghaus Forgetting Curve.) 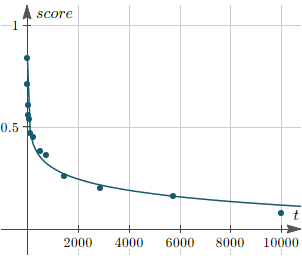 The question: You can see a "best fit" curve has been drawn through the data points. What is the equation of that curve?

We assume our logarithmic function will have the form:

We now aim to find the values of c and d.

We know from the section on Graphs on Logarithmic and Semi-Logarithmic Axes that we can turn a logarithmic (or exponential) curve into a linear curve by taking the logarithm of one of the variables.

To do so, we take the original data set (the columns "time" and "proportion") and find the logarithm of the independent variable, time. (Normally we would use natural log for such analysis, but I'm sticking with base 10 to be consistent with the earlier examples.)

Now we can easily deduce the linear equation for this curve (I'm taking the first data point and the second last, since the last one is clearly not that close to the smooth curve.)

I use the point-slope formula for a line:

Next, we simply replace the "x" with log10(x) and achieve the required equation:

NOTE: The Ebbinghaus Forgetting curve is usually modeled using an exponential curve, but this data quite nicely fits a logarithmic curve for the given values. It's not a good model if we extrapolate it into the future, since this logarithmic curve doesn't flatten out (like the appropriate exponential one would, and it eventually goes off into negative territory.)

Hopefully, whatever logarithmic graph you are trying to find the equation for will be covered by one or more of the cases above.

3 Comments on “How to find the equation of a logarithm function from its graph?”