Earth revolving around the sun

Many buildings and bridges use the ellipse as a pleasing (and strong) shape. 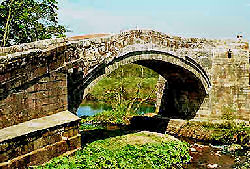 One property of ellipses is that a sound (or any radiation) beginning in one focus of the ellipse will be reflected so it can be heard clearly at the other focus. You can see what this means in the following animation.

Ellipse with horizontal major axis (in blue) and showing the minor axis in magenta color.

The equation for an ellipse with a horizontal major axis is given by:

Ellipse as a locus

The ellipse is defined as the locus of a point `(x,y)` which moves so that the sum of its distances from two fixed points (called foci, or focuses) is constant.

We can produce an ellipse by pinning the ends of a piece of string and keeping a pencil tightly within the boundary of the string, as follows.

We start with these 2 foci:

Our complete ellipse is formed:

Find the coordinates of the vertices and foci of

Ellipse with vertical major axis (in blue) and minor axis in magenta.

A vertical major axis means the ellipse will have greater height than width.

If the major axis is vertical, then the formula becomes:

We always choose our a and b such that a > b. The major axis is always associated with a.

Find the coordinates of the vertices and foci of

To find c, we proceed as before:

The foci (green dots) are very close to the vertices in this ellipse.

Find the equation of the ellipse which has a minor axis of length 8 and a vertex at (0,-5).

We can calculate the eccentricity using the formula: 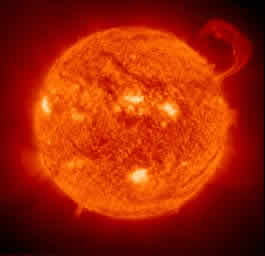 The Earth revolves around the sun in an elliptical orbit, where the sun is at one of the foci. (This was discovered by Keppler in 1610).

(i) What are the greatest and least distances the Earth is from the sun?

(ii) How far from the sun is the other focus?

(The "semi-major axis" means half of the major axis length. In our example, it is (close to) the "average" distance of the sun from the earth, and is also known as one A.U., or "astronomical unit".)

Note: In the graph, I have exaggerated the shape of the elliptical orbit (I squashed it a bit so it looks more elliptical) and the positions for the 2 foci are shown much further apart than they really are.

In the diagram above, units are in millions of kilometers.

We have assumed that the sun is at the right-hand focus, at the point (c, 0).

We need to find c, to tell us where the foci are.

The closest we are to the sun is

The furthest we are from the sun (distance from B to the sun) is:

Our orbit is almost circular. (The eccentricity is very small at `1/60`).

Note: To graph the ellipse above, I needed to find b, as follows:

Using the formula for an ellipse,

the required curve is

Ellipses with Centre Other Than the Origin

Like the other conics, we can move the ellipse so that its axes are not on the x-axis and y-axis. We do this for convenience when solving certain problems.

For the horizontal major axis case, if we move the intersection of the major and minor axes to the point (h, k), we have:

The ellipse is as follows:

Sketch the ellipse with equation

So the sketch is:

How can we obtain an ellipse from slicing a cone? 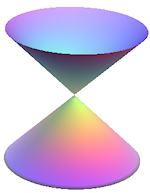 When we slice one of the cones at an angle to the sides of the cone, we get an ellipse, as seen in the view from the top (at right). 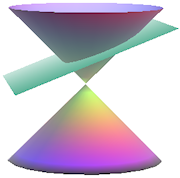 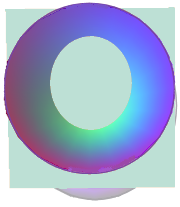