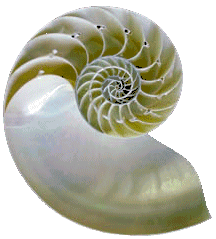 This spiral occurs naturally in many places like sea-shells where the growth of an organism is proportional to the size of the organism.

It's also known as the Logarithmic Spiral due to the way the spiral arms increase in distance from the center at the same ratio.

The general polar equation for the equiangular spiral curve is

We can see that any radius vector makes the angle `80^@` with the curve.

[For background, see the vectors chapter.]

The equiangular spiral is not the same as the "Spiral of Archimedes" which has the form:

This spiral has arms which are equidistant.

See this article on finding the length of an Archimedean Sprial, using calculus.