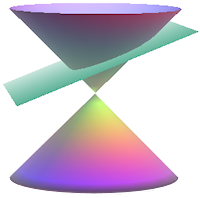 An interesting application from nature:

(Image from Tree of Life)

The curves that we learn about in this chapter are called conic sections. They arise naturally in many situations and are the result of slicing a cone at various angles.

Depending on where we slice our cone, and at what angle, we will either have a straight line, a circle, a parabola, an ellipse or a hyperbola. Of course, we could also get a single point, too.

Science and engineering involves the study of quantities that change relative to each other (for example, distance-time, velocity-time, population-time, force-distance, etc).

It is much easier to understand what is going on in these problems if we draw graphs showing the relationship between the quantities involved.

The study of calculus depends heavily on a clear understanding of functions, graphs, slopes of curves and shapes of curves. For example, in the Differentiation chapter we use graphs to demonstrate relationships between varying quantities.

We begin with the Distance Formula »