We all learn to use degrees when measuring angles, but most science and engineering applications use radians.

Radians are an alternative way of measuring angles, or the amount of turn. A lot of people get confused by radians and that's a shame, as they are not that complicated.

The definition of a radian puts a lot of people off before they even start. Here's one from MathWorld:

The radian is a unit of angular measure defined such that an angle of one radian subtended from the center of a unit circle produces an arc with arc length 1.

Let's investigate what a radian means using a circle of radius 6. Why? Because radians work for any circle, not just the unit circle. (A unit circle has radius 1 unit).

The following circle is not an image - it's an interactive graph.

Drag the point D around this circle (with radius 6) and note what the angle is in radians. The length of the blue arc also changes as you go around the circle. Anti-clockwise is positive.

When you get to 1 radian, it should look like this (this is a screen shot image): 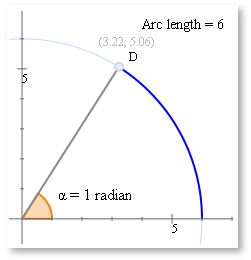 Note the arc length is the same as the radius (both equal to 6 in this case).

And that's all one radian is - the angle we get when we rotate around a circle to the point where the arc length equals the radius.

Another way of putting it is that an angle measured in radians is given by:

In fact, here are some special angles as measured in radians:

Where do these values come from?

Let's look at the case for one complete revolution of our circle. Recall the formula for the circumference of a circle:

Now if we go once right around the circle in the interactive graph above, the arc length (the circumference) is 2π × 6. And remember, the angle in radians is the arc length divided by the radius.

So in radians, the angle right around this circle is:

Following similar thinking for 1/4 the way around the circle, 1/2 way round and 3/4 of the way around, we get the special values given above.

Note 1: For the first 2 numbers in each of the statements above, I haven't written the word "radians". If there is no degree sign, then it is assumed we are talking about radians.

Note 2: Radians can be expressed using multiples of π, or they can be written as decimals.

What a lot of students do is to translate their radian angles into degrees so it's easier to understand what is going on. That's OK, but I encourage you to try to think in radians. You'll be using them most of the time in higher level math.

Why radians - what's wrong with degrees?

Angles are all about amounts of turn, and so they are closely related to circles. Radians are simply the amount we turn around a circle, calculated as the length of the arc we form, divided by the radius of the circle.

Many problems can be calculated directly if we know the angle in radians. For example, I can find the arc length for a particular circle by just applying the radian definition in reverse:

Try it out in the interactive graph above. When your angle is 2 radians, the arc length should be 12 units.

There are many other mathematical problems where it only "works" in radians, for example differentiation and integration problems in calculus.

One of the most common mistakes students make after they have studied radians is to forget to check that their calculator is in the correct mode. Make sure radian mode is selected on your calculator when the question is given in radians.

Back to the definition

The radian is a unit of angular measure defined such that an angle of one radian subtended from the center of a unit circle produces an arc with arc length 1.

For the example we played with above, the radius was 6 units and the arc length was 6 units to give us an angle of one radian.

Radians are an alternative way of measuring angles. Once you start using them, you might wonder why we ever learned about degrees.

[The interactive graph above was made using JSXGraph.]

22 Comments on “Radians: an introduction”