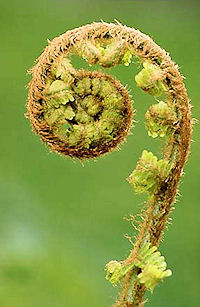 Here's a recent question from reader Pehr in Sweden:

Hi,
First of all, wonderful site. Love it.
I've been studying the polar coordinates section hoping to expand my knowledge on the equiangular spiral. The interactive tools are great, though I'm having a hard time to derivate the exact mathematical solution to why the resulting function for the golden spiral is
r = ae^(b(theta))

For some background on Pehr's question, see:

Spirals are common in nature and have inspired mathematicians for centuries. 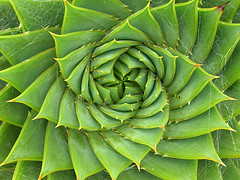 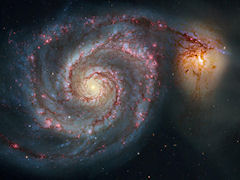 The Golden Spiral that Pehr is asking about is a special case of the logarithmic spiral.

Logarithmic spirals grow such that the angle of a line from the center of the spiral to the tangent to the curve at that point is constant. This is why they are also known as "equi-angular" spirals.

To see what this means, the 3 acute angles marked in the following fern image are approximately 80° 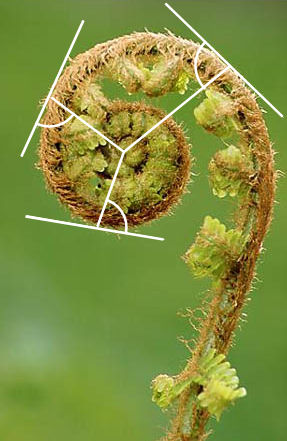 We normally use functions in Polar Coordinates when describing spirals. Otherwise, if we use ordinary rectangular coordinates, the formulas become very complex.

The formula for a logarithmic spiral using polar coordinates is:

r is the distance from the origin (or "pole")

a is a constant

θ is the angle (in radians) from the horizontal axis. So the coordinates of a point on the curve in polar coordinates is given by (r, θ).

As a consequence of the way we defined the logarithmic spiral, the ratio of the distances from the center to each spiral arm of an adjacent pair is constant. 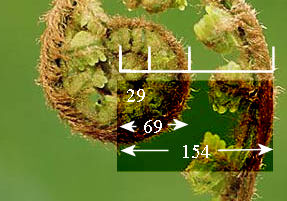 Spiral arms at a constant ratio

We see the ratios are almost the same. (In an actual logarithmic spiral, they are exactly the same. Choosing the start point for the fern is not an exact science!)

The Golden Spiral is a special case of the logarithmic spiral.

We can write the general logarithmic spiral as a function in polar coordinates using t as follows:

Note: Normally, we use θ for the independent variable, but we often use t as we can think of the spiral being traced out over time. Besides, it's easier to type!

The Golden Spiral has the special property such that for every 1/4 turn (90° or π/2 in radians), the distance from the center of the spiral increases by the golden ratio φ = 1.6180.

For this to occur, cot b must take the value (which comes from solving our function):

Using this value, and taking the simple case where a = 1, our function becomes:

We'll use the excellent free graphing tool GeoGebra from here on.

Now if we graph our function on ordinary rectangular coordinate axes in GeoGebra, we get the following exponential curve. Note that r increases at an ever-increasing rate (it gets steeper) as t increases. 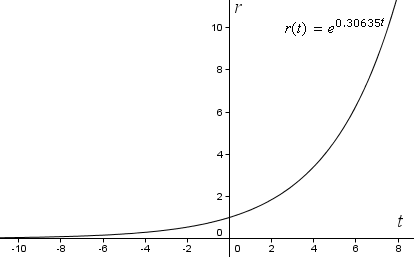 But to see a spiral, we need to graph the curve using polar coordinates.

Let's substitute a few important values to see what this expression means. Starting at t = 0, we get the starting point of the curve:

So it means we start 1 unit from the origin along the positive x-axis. You can see the starting point in the following graph of the spiral. 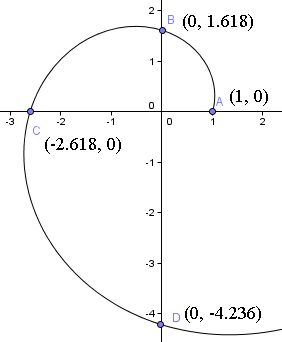 Another rotation of a quarter turn brings us to t = π, where:

We could work out our next position, along the negative y-axis, by just multiplying this last value by φ = 1.6180, giving us:

We can see these values are correct on our spiral graph above. 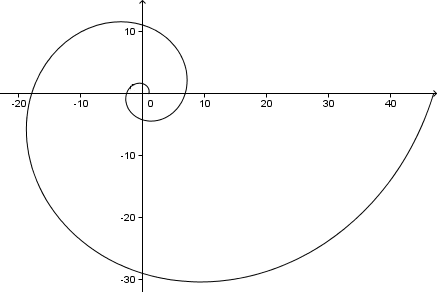 As an aside, since in this problem

Approximating the Golden Spiral using arcs of a circle

We can obtain a spiral that looks quite similar to the Golden Spiral by using arcs of circles that increase in size by the Golden Ratio, as follows.

We start with a 1×1 square and draw an arc, center C, through 2 corners such that the sides of the square are tangent to the arc (that is, they touch once only). 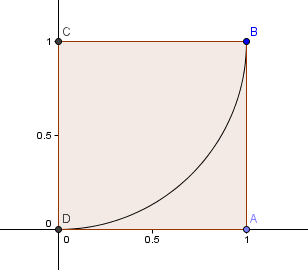 Next, we place a square with side length φ = 1.6180 above our first square and construct another circular arc, center E, as before: 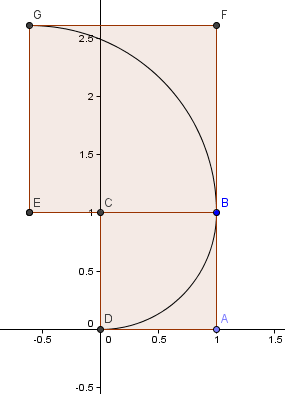 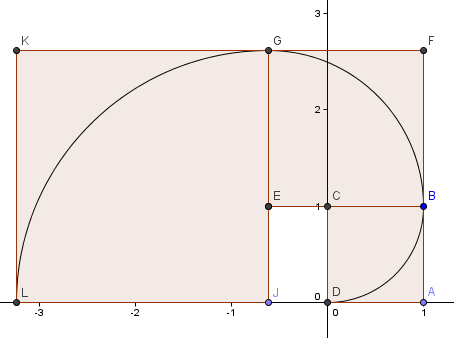 We continue the pattern (we've gone another complete round) and get a spiral which looks quite a lot like our Golden Spiral from before. 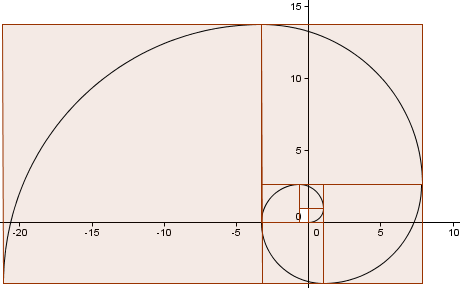 How close is our approximation? 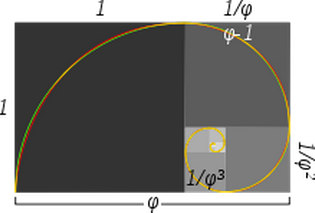 The caption for the image states:

Approximate and true golden spirals: the green spiral is made from quarter-circles tangent to the interior of each square, while the red spiral is a golden spiral, a special type of logarithmic spiral. Overlapping portions appear yellow. The length of the side of a larger square to the next smaller square is in the golden ratio.

Can we re-create this ?

In the image below, the red curve is first part of the Golden Spiral we constructed above, whereas the green curve is based on the quarter-turn approximation we were just working on. 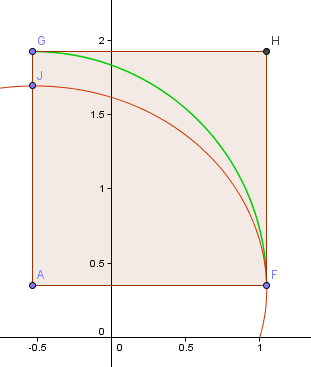 The point F is the "right most" point on the spiral, which will be my starting point for the quarter-turn arc. The point J is the highest point of this portion of the spiral.

Point A is the intersection of the horizontal and vertical lines passing through F and J respectively and this will be the center of my arc.

Now, the arc GF is not at all close to the related portion of the spiral FJ.

Let's do another step and see if the next part is any better. 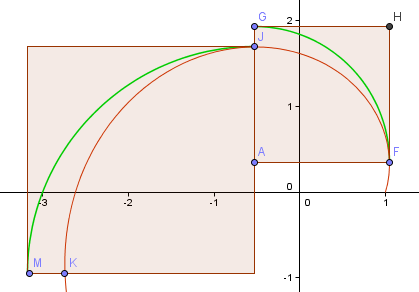 As you can see, it's worse (as expected, since we have moved further away from the origin and the spiral arm is getting bigger).

Clearly, this is never going to work.

However, in my earlier Golden Spiral I was using:

The constant a, had value 1.

If we want our approximating arcs to be a good fit for the actual Golden Spiral, we need to use a value of (probably not surprisingly)

This gives us the following curves, similar to the graph in Wikipedia.

The red curve is the Golden Spiral,

The green curve is the collection of circular arcs. 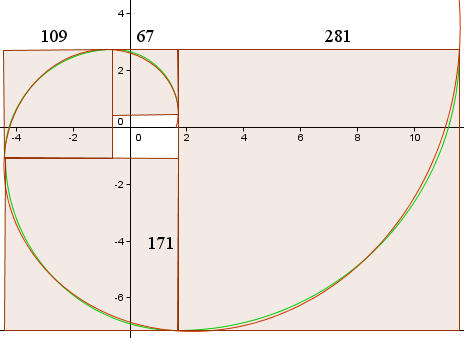 The side length of the squares (in pixels) are shown and we can see they are approximately in the ratio 1.618013...

Golden Spiral in the media

In the Season 4 episode "Masterpiece" (2008) of the CBS-TV crime drama "Criminal Minds," the agents of the FBI Behavioral Analysis Unit are confronted by a serial killer who uses the Fibonacci number sequence to determine the number of victims for each of his killing episodes. In this episode, character Dr. Reid also notices that locations of the killings lie on the graph of a golden spiral, and going to the center of the spiral allows Reid to determine the location of the killer's base of operations.

It is believed by many that designs using the Golden Ratio and Golden Spiral are pleasing to the eye.

Here is a great article by a guy who has contructed a golden spiral without images. (Mostly for those interested in Web design)

As he suggests in the article, an elephant's trunk is also close to the Golden Spiral. 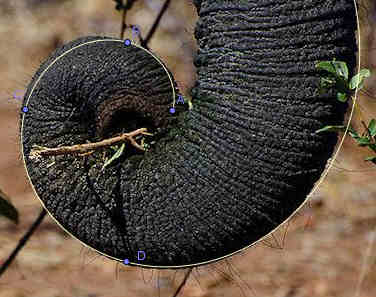 The Golden Spiral is an interesting topic - one worth pursuing not only for the pleasant designs involved, but also the interesting math behind them.

I hope that helps to answer your question, Pehr!

See the 21 Comments below.