Arc length of a spiral around a paraboloid

A reader from Africa, Magnar, recently asked about running a string in a spiral around a parabolic dish, as illustrated in the following image: 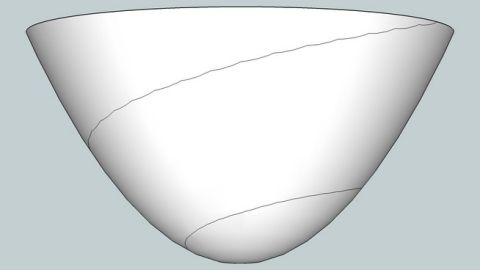 Magnar wanted to know how to calculate the length of such a spiral.

There's an interesting story behind Magnar's question. He builds parabolic dish cookers in Africa. In this photo, he's helping to install one of his dishes in a village. The dish concentrates the heat of the sun and the cook pot is placed at the focus of the parabola. 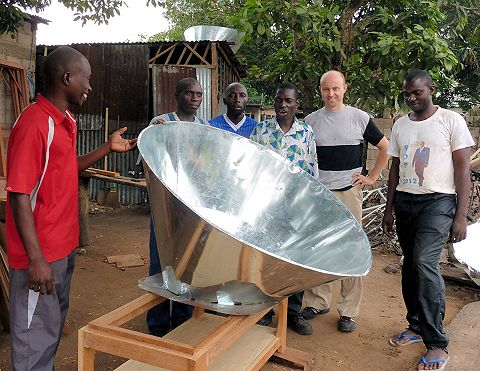 This is a great use of sustainable energy, it keeps the air cleaner (by avoiding open fires inside huts), and saves women from the backbreaking and time-consuming task of gathering firewood every day.

Let's look at some of the math behind this problem.

The surface generated by that equation looks like this, if we take values of both x and y from −5 to 5: 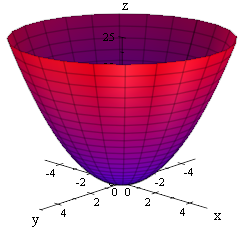 We can also represent this paraboloid using parametric equations with variables t and r, as follows:

We could write this as an ordered triple, like this:

We only need to let t take values from 0 to 2π (otherwise we just "paint" the surface more than necessary) and r takes values from 0 to 5 if our aim is to create the same curved surface as shown in the above graph.

A spiral on the surface

Let's get back to the original problem. We want to create a spiral around the surface of the paraboloid. We modify the earlier parametric equations to get a curve rather than a surface, like this.

Once again, we could write this as an ordered triple, as follows:

We no longer create a surface with this expression. Instead, it will be a curve.

As the variable t takes various values starting from t = 0, it generates a spiral around the 3-D surface.

Let's see how, starting with a simple case.

Let's consider the case where we fix the curve so it is in the x-z plane only (it's not actually spiralling in this case, to make things simple.) We write this as: 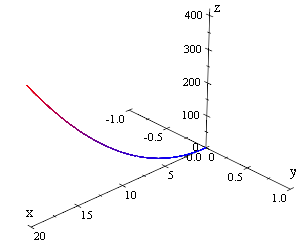 What is the length of this simple curve?

Arc length of a curve

We use a result from calculus, which is based on the Pythagorean Theorem.

The arc (or curved) length is given by:

(I used a computer algebra system to find this integral.)

This seems quite a low firgure for the length, since the z-value at the end of the curve is 400, and going around the curve should add more than just over 1 unit to the length.

However, the above graph does not have equally-scaled axes, whereas the following one does.

We see that a parabola is "almost" straight, and a curve length of just over 400 for this curve is reasonable.

Let's now see the effect of those trigonometric terms we saw before. 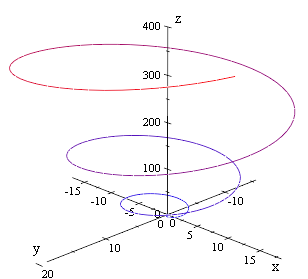 For interest, looking from above (down along the z-axis), the above spiral looks like this: 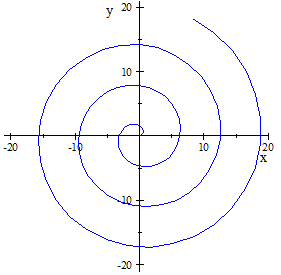 The arc length for a 3-dimensional spiral

We extend the 2-dimensional case above now that we are working in 3 dimensions. In general, the length of an arc when using the parametric terms ((x(t), y(t), z(t)) is given by:

Substituting in our expressions for x, y and z, we have:

Considering one of Magnar's cooker designs, the parabola has a cross-section which is quite flat compared to the paraboloid we drew above. (Like most parabolic dishes, they are using flat panels to approximate the curved surface.) 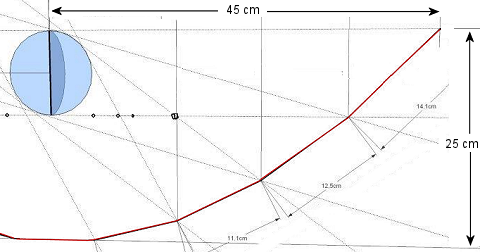 In fact, the top lip passes through the point (25,45) in that design. The general form of a parabola can be written:

We now plot the curve

Here it is from the side: 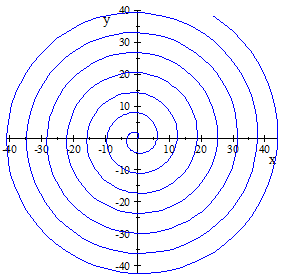 How do we get more or less spirals?

We have around 7 turns in the above spiral, but we may need more or less. If we want to achieve more spirals within the same x-, y-, and z-constraints, we need to multiply the variable within the trigonometric terms by a number.

Here is the case when we multiply the variables in the trig terms by 5. That is:

We get around 35 spirals this time:

Here it is from the side.

The length of this spiral is:

Similarly, if we multiply those variables by a number less than 1, we get less spirals. Here is the case when we multiply by 0.3: 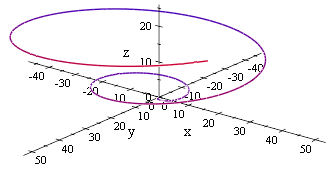 This time we have just over 2 spirals (which is similar to the situation we had in Magnar's first diagram at the top) and our length is:

This has been an interesting application of math where 3-D geometry and integral calculus are being used to examine a good use of solar power. We need to make more use of the huge amount of energy available from the sun, and solar cook pots are a great way to do so.

12 Comments on “Arc length of a spiral around a paraboloid”