Is she beautiful? The new Golden Ratio

Canadian and US researchers found there were certain facial proportions that made some women more beautiful than others.

In the SMH article Shania Twain more beautiful than Angelina Jolie? we read the researchers manipulated the photos of certain women using Photoshop so the facial proportions were changed. Then warm-blooded males were asked to choose the photos that were most appealing. It turns out the "ideal" value (the one found to be more beautiful) for the following facial ratio was 36%:

Another key ratio affecting our perception of beauty is the following:

An ideal value for this ratio is 46%.

Apparently, the canadian singer Shania Twain has pretty much the perfect face. Let's check out her proportions. In this image, the eye to mouth distance is 72px, marking 36% of the facial height (200px). 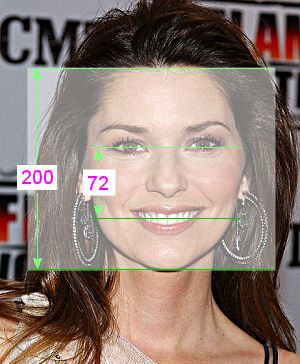 While the distance from her hairline to the bottom of her chin is quite easy to determine, and the center of the eyes is also quite clear, there is some uncertainty about the "mouth". In the above photo, she is smiling. Even with the mouth closed, it's not that exact where the "mouth" is.

Next, we look at the ratio of the distance betwen the eyes to facial width. The ratio 72:156 is equivalent to 46%, as claimed in the research. 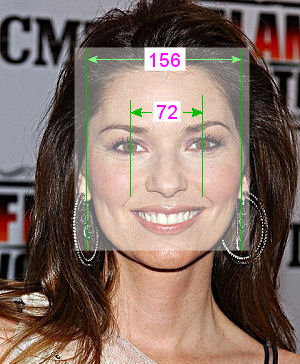 Once again, there is some ambiguity. What do we take as the "side" of the face? The article says the face width is the distance "between the inner edges of the ears". But it is rather subjective deciding quite where that comes.

It is generally believed we are attracted to people whose physical features are symmetrical (a mirror image down the center) and in proportion. That proportion often turns out to be connected with the "Golden Ratio" (Φ = 1.618033...)

The above research claims to be a "new Golden Ratio" for determining beauty.

Stephen Marquardt has conducted similar studies to find the "beautiful" face. He has created a mask which can be placed over different faces to determine whether they fit the classic notions of beauty (at least from a mathematical point of view). The mask is based on the Golden Ratio (or more specifically, the "golden decagon".

Let's use his mask and measure the same ratios as used by the canadian/US researchers.

Now we look at the other ratio, eye distance to face width.

The ratio 138:279 = 49.5%. Once again, this is larger than the more recent research above, but it's not clear where the "inner edge of the ear" is for the Marquardt mask.

While the above is interesting mathematically, I wouldn't take it too seriously...

You may also be interested in: The Math Behind the Beauty.

18 Comments on “Is she beautiful? The new Golden Ratio”