The Math Behind the Beauty

What has mathematics got to do with beauty? Actually, a lot. Physical attraction depends on ratio, and in particular symmetry. (See Facial attractiveness: evolutionary based research.)

Our attraction to another person's body increases if that body is symmetrical and in proportion. Likewise, if a face is in proportion, we are more likely to notice it and find it beautiful.

Scientists believe that we perceive proportional bodies to be more healthy. This is suggested in the following famous drawing by da Vinci showing an idealized human body within a square and a circle. 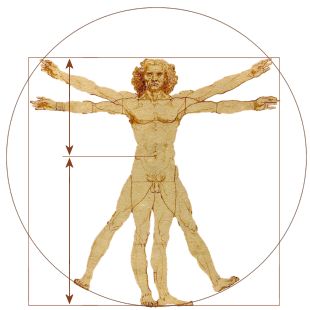 Leonardo da Vinci's drawings of the human body emphasised its proportion. Many have claimed the ratio of the following distances in the above Vitruvian Man image is the Golden Ratio:

Similarly, it is believed buildings may be more attractive to some people if the proportions used follow the Golden Ratio.

The Golden Ratio (or "Golden Section") is based on Fibonacci Numbers, where every number in the sequence (after the second) is the sum of the previous 2 numbers:

We will see (below) how the Fibonnaci Numbers lead to the Golden Ratio:

Why do many people feel that Jessica Simpson is beautiful?

When placed over the photo of Jessica Simpson, we see there is a good fit (that is, the proportions of her face fit the geometrically "nice" proportions of the mask, based on the Golden Ratio).

Her beauty is mathematical!

Let's look at the ratio of each number in the Fibonacci sequence to the one before it:

If we keep going, we produce an interesting number which mathematicians call "phi" (Golden Ratio or Golden Section):

This ratio was used by architects and artists throughout history to produce objects of great beauty (like Michelangelo's "David" and the Greek temples.) 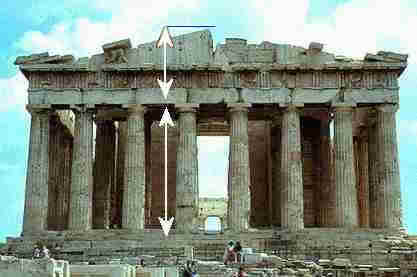 The Parthenon in Greece. The ratio of the distances indicated is the Golden Ratio.

Note: The choice of the arrow placement in the above image is somewhat arbitrary. The bottom of the lower arrow is placed one one of the steps leading up to the main building, which is not overly convincing.

Phi (Φ) is like pi (π) in the sense that it is an irrational number. There is no equivalent fraction for Φ and its decimal keeps going and never stops. 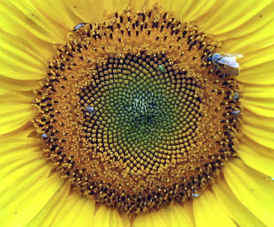 The Golden Ratio also occurs in nature, in the patterns we sometimes see in sunflowers, pine cones and so on. This is largely because one of the best ways to efficiently pack things tightly together is using the Fibonacci sequence.

The conection with physical attractiveness and the Fibonacci sequence is interesting to consider, but is not always conclusive, and not particularly scientifically valid. See: Is Phi a Fibonacci furphy?

In many cases, it's probably a matter of finding the pattern you are looking for, rather than a meaningful observation. In short, it's a bit of fun, and not to be taken too seriously.

This interactive allows you to place a mask over the photos of so-called beautiful people, and see how close their face is to the ideal. Read more »

Is she beautiful? The new Golden Ratio

Math of the Moors

The Moors were Muslims who overtook Spain in the 8th century AD, bringing with them a Renaissance of learning, especially in math and science. Read more »

How to use negative numbers in real-life situation by Kassarin [Solved!]

Upload own pictures into face mask by Chye [Solved!]

Add more faces in Beauty of Math by Denise [Solved!]

This algebra solver can solve a wide range of math problems.

Easy to understand algebra lessons on DVD. See samples before you commit.