Pi has excited mathematicians for thousands of years. Why all the interest?

Pi arises in may fields of mathematics, for example:

Some Quick Highlights of the History of Pi

As far back as the 3rd century B.C.E. (Before Common Era), Archimedes found that pi was between

By the 5th century, the Chinese had the respectable value (correct to 6 decimal places):

By the 17th century, the use of infinite series meant that we could get more and more accurate values of π, as long as we had plenty of time (or computing power) to calculate more decimal places. For example, Leibniz (of calculus fame) developed the following expansion for pi, but it wasn't very good (see more at Finding Pi using Infinite Series):

The Greek letter pi (π) is used since it is the first letter of the Greek word for "perimeter", meaning "distance around the outside". If we have a circle with diameter 1 unit, then the perimeter will be π units.

One of the first things that computer engineers do when they are testing a new computer chip (or programming language or operating system) is to calculate the value of pi to check that everything is working correctly.

For example, just after World War II, the huge ENIAC computer managed to compute pi to just over 2,000 places.

How's this for a great piece of pi art in downtown Seattle? 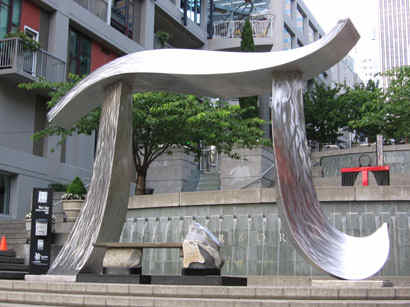 And you can't beat this: 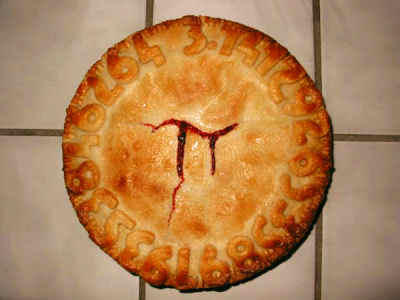 This one is original:

You may also be interested in Math of Beauty, which has some interesting observations regarding the ratio Φ...