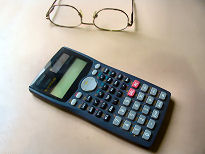 Does a calculator store every answer that every human may ever ask it?

Actually, no. The pocket calculator just remembers special polynomials and substitutes whatever you give it into that polynomial. It keeps substituting into terms of that polynomial until it reaches the required number of decimal places. It then displays the answer on the screen. [See the definition of a polynomial.]

So what are these special polynomials? In this chapter, we learn that they are infinite series expansions. We also learn how to obtain such expansions, using differentiation.

Apart from their uses in calculators and computers, infinite series expansions are used:

This section also serves as an introduction to the Fourier Series, that we meet later.

1. Taylor Series - which can express a function in polynomial form, near some local value.

2. Maclaurin Series - which expands the function near x = 0

3. How Does a Calculator Work? - which explains how calculators find values of functions