Before we talk about integers, let’s think about the numbers we first learned as children.

The natural numbers arise from counting. We can have

We put a dot on those numbers that are included. In this case, we have graphed 0, 1, 2, and 3, but we have not included 4 to illustrate the point.

We can also write the natural numbers as a set:

The natural numbers are sometimes called whole numbers or counting numbers. There is some disagreement among mathematicians about whether or not zero should be included. [See Is 0 a Natural Number?]

Less Than and Greater Than

On the number line, LEFT is LESS. We use the "<" (less than) sign to indicate one number is smaller than another number.

We use the ">" (greater than) sign to indicate one number is bigger than another.

One of the biggest problems people have in mathematics is with negative numbers. Take great care with negatives!

Once again, we have put dots on the number line representing the numbers in the set.

Now we're ready to dive in.

Notice that the set does not include decimals or fractions − just whole numbers.

They are represented on the number line like this:

Recall from above that on the number line, LEFT is LESS.

The distance from 0 to a number is its absolute value (written using vertical line brackets around the number).

In each example, the number on the right is the distance from 0.

Opposite of an Integer

The opposite of an integer is obtained by changing its sign. (That is, change − to + or change + to −).

Examples of Opposite of an Integer

Notice that opposite is not the same as absolute value.

Use the number line and think of "journeys". 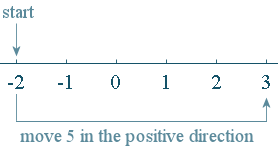 It is -4° and snowing. The forecast for tomorrow is for a rise in temperature of 6°. What will it be tomorrow?

We can change the subtraction into a more familiar addition by realising that subtracting an integer is the same as adding its opposite. 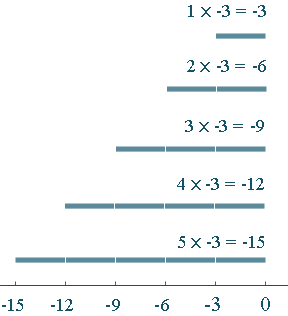 Notice that we were multiplying a positive number by a negative number and our result was negative.

Similarly, we can show:

The acceleration due to gravity (1 g) on the earth is about −10 ms−2. (It’s negative because it acts downwards. This is a convention.)

On Jupiter, the acceleration is around:

We can summarise the results for multiplying:

When we divide with negative numbers, we have similar results to those for multiplication:

We can rewrite division problems as multiplication problems, as in the following example.

is the same question as

The set of integers is closed, commutative, associative and has an identity under both addition and multiplication.

The following table gives examples and explains what this means in plain English.

The Distributive Law over addition and subtraction holds for integers:

In a magic square, all the rows, all the columns and the 2 diagonals must add to the same number.

1. Complete the magic square, using only the positive integers 1 to 9:

2. Complete the magic square, using only the integers: