1. New on IntMath: Witch of Agnesi

I've started a series of articles on historical math curves.

The page has some background to the curve and some animations explaining how it is constructed. There's even a connection between this curve and calculus.

Data will be the most valuable commodity in the 21st century, and those able to make sense of it will do well. This tool could help.

Most of you will know I'm a fan of technological approaches to teaching and learning of mathematics.

(a) Mathematics at the speed of light

Image processing is at the core of augmented reality, autonomous driving and facial recognition. But because it's currently achieved using electronic circuits, it's too slow.

Simulations are developed to try to understand and predict the future of such things as climate change, disease transmission and cosmic events. But how do we interpret and make best use of new data?

A new system, called Etalumis ("simulate" spelled backwards) developed by a group of scientists from the University of Oxford and others, makes use of Bayes' Theorem (which is a way to calculate probabilities based on probabilities for events that have already occurred) to solve such problems.

The comments rightly point out some of the cultural biases in the video, but it probably can't be helped when compressing such a highly complex data set into just 5 minutes.

Clarification: The puzzle in the September IntMath Newsletter asked about the probability involved in a given octagon. There were conflicting answers given, and I provided a solution. However, it turned out my attempt had a problem, and Tomas' answer was correct. You can see the discussion here: Octagon discussion

The puzzle in the last (October) IntMath Newsletter asked about "square ages".

There were two parts to the puzzle, and Thomas was the only one who got both parts correct. (Special mention to Don who got the first part, and the range of years correct for the second part.)

The table below shows the daily earnings for two workers for 5 days and the mean and the median salary.

(a) Which statistic, the mean or the median, would be best to describe the typical daily salary for the 5 days for Person A? How about for person B?

Jean-Francois Rischard, ex-World Bank vice president wrote the book High Noon: 20 Global Problems, 20 Years To Solve Them in 2003. Sadly, the scorecard for his 20 Problems is rather abysmal as we approach the 20th year of the century. 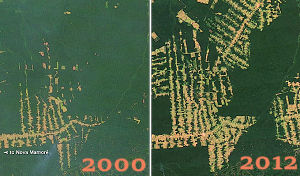 Deforestation of the Amazon, which has become worse under Bolsanaro [source]

I wrote a summary review of the book in 2008. I concluded by saying:

Mathematics is involved in the solutions for all these problems. So instead of doing algebra with no purpose other than to pass an examination, let's put our mathematical efforts into coming up with ways to solve (at least some of) these problems.

Governments should be placing many of the 20 Global Problems in the center of their policy frameworks, but they're not, and too many governments are actively doing the opposite.

As a counterpoint to the destruction of the Amazon, here's what one Brazilian photographer achieved in 18 years, something that should be happening worldwide: 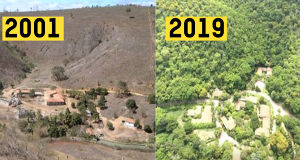 Please be careful who you vote for...