Today is equinox (equal day and night), where the center of the sun is directly above the equator (very near where I live). In the Southern hemisphere, it's the beginning of spring.

The various calculators on IntMath continue to be popular among visitors.

Some of the other calculators are:

There are now over 200 interactive applets on IntMath. You can see a list of all of them here:

Most music has elements of rhythm, melody and harmony, which are all mathematical in nature.

Here's another round of free Webinars from the people who bring us Wolfram|Alpha where you'll learn what's new in Mathematica and Wolfram Language 12. Each of these is on a Wednesday, 5-6pm GMT (3pm in Sydney, 10pm Tue in LA).

(a) A Breakthrough for A.I. Technology: Passing an 8th-Grade Science Test

Driven by neural networks (mathematical systems that learn by analyzing huge amounts of data), AI has much potential, but also poses dangers.

These are significant limitations in my view. Scientific thinking cannot be adequately assessed via multiple choice.

However, this is still quite an achievement and is yet another step forward in the inevitable advancement of AI.

(b) Why Do We Need Super Accurate Atomic Clocks?

Did you know that not only do we need leap years (the Earth's rotation around the sun is very nearly 365.25 days), we also need leap seconds (there has been around 1 leap second added to UTC (aka GMT) every 2 years since 1972)?

His passion for explaining things to others is obvious.

(b) Making sense of irrational numbers

The Pythagoreans had their fundamental beliefs questioned by the philosopher Hippasus, who showed √2 could not possibly be a rational number.

The puzzle in the last IntMath Newsletter asked about a mystery object.

There was only one attempt at an answer (by Nicola, who guessed it was an abacus).

One possible approach to image search: The easiest way to find out what an image could be is to take a picture of it with Google Lens (on your phone). This brings up many sites talking about – and naming – the object.

Another approach: Right clicking on the image (on the blog copy of the Newsletter) and choosing "Copy image address" and pasting that into the search box on Google Images also brings up many results.

The object was a kleroterion, used by the ancient Greeks to randomize the selection of citizens (male, of course) to the boule (local council), to political roles, and as court jurors. (See more: Kleroterion)

It was basically like a modern-day lotto machine, that spits out numbered balls. 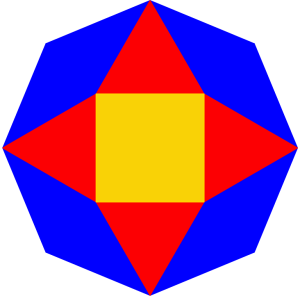 Find the probability for a point chosen randomly within the octagon to be blue. The red triangles are equilateral.

6. Final thought - they knew there were concerns, but went ahead anyway

I was watching a documentary about the 1980s recently, and it included the tragic events of the explosion of space shuttle Challenger, which held the first teacher in space, Christa McAuliffe.

The engineers knew there were safety concerns (it was a very cold day and vital O-rings failed, a highly probable outcome known for over a decade previously), but went ahead with the launch. 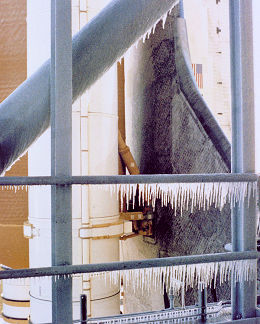 Later this century, when several tipping points have occured and climate change becomes irreversible, kids will ask their grandparents, "You knew it was a risk, so why did you let it happen?"