'Tis the season for Hanukkah (starts today), Christmas (25th Dec or 7th January), New Year (1st January and many other dates in other countries) and other celebrations. Whatever you celebrate, I hope next year is full of health, peace and good learning.

There have been a lot of reader requests for a page on Shell Method. Some of the 3D mental gymnastics you need to do for this topic can be quite challenging, but there are some great applications using this method of finding volumes using integration.

Mathpix is a clever math solver that can read hand-written math using your mobile's camera.

It's quite well done and has a lot of promise, but I found the results somewhat "clunky" at times. (It quite often misread math, even printed examples.)

This provides us with yet another dilemma, similar to the one discussed when I mentioned Photomath last year. Such tools can help students learn math, but there is always the fear students will just use the tool to do their homework for them and just copy-paste, and will learn very little.

Disclaimer 2: Like all technologies, Mathpix can be used for good, and not-so-good.

3. Math in the news and Math Movie: Bitcoin

As I write, the value of bitcoins has surged. To give an idea of how much, here's a quote from Bloomberg:

The puzzle in the last IntMath Newsletter asked about intersecting quadratic functions.

Correct answers with explanation were provided by Tomas, Chris, and C Trenor, who rightly said we should make use of all the tools available. (He suggests Desmos, Symbolab, Wolfram|Alpha and GeoGebra.) In fact, each respondent used a graphics tool to see what was going on, which makes a lot of sense to me.

Also, see: Conic Sections 3D Interactive, where you can investigate in 3 dimensions what's happening when a plane intersects a cone, producing parabolas, hyperbolas and so on. (Move the top slider to 90°, and you'll see one of the "degenerate forms" appear).

You only really understand a math problem if you can do it algebraically, numerically and graphically. Let's look at it all 3 ways.

We can easily substitute each of the 5 coordinate pairs into the given equations, and will see each one "works" (that is, the left side of the equation equals the right in each case). However, that doesn't answer the "how is it possible?" part of the question.

Our aim is to solve the following 2 equations simultaneously.

We can factor the left side of each of the above. This first involves some observation (there appears to be a common term, (x − y) throughout the first one). We use polynomial division to give:

With some further thought, we can conclude solutions lie along the lines:

OR at the intersection of

These are just the expressions we found by factoring.

This is what Desmos gives us for equation (1). It's actually two intersecting lines, which in this case are degenerate hyperbolas (which occur when a plane intersects a double cone through the tip of the cones):

And here's what we get for (2), another set of straight lines: 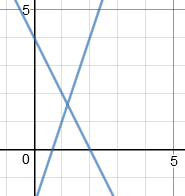 (The above lines are the ones we found algebraically, earlier.)

Here's the graph of both degenerate parabolas on the one set of axes. The line through (0, 4) and (2, 0) is y = −2x + 4, the common term in our algebraic solution given above (and is quite dark because the 2 graphs are coinciding).

The graph also shows the 5 intersection points mentioned in the puzzle question: 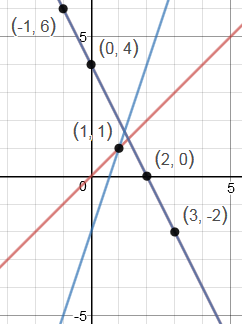 The curves produced by the quadratic function,

can be either of the following, depending on the value of B2 − 4AC:

Other systems of quadratic equations could produce more than 4 intersection points, for example:

It's not exactly the star on top of a Christmas Tree, but this problem reminded me of it.

The first two triangles are combined as shown in the third image.

What fraction of the large triangle is the shaded area?

Singapore is a small island state and it's been my home for over 20 years. I've never owned a car here (they are prohibitively expensive, and I've never wanted one since the public transport is mostly excellent).

Singapore has one of the highest rates of luxury
car ownership in the world [Image credit: Inquirer]

Roads already take up 12 per cent of Singapore’s total land area, compared to 14 per cent for housing.

Most cities worldwide are being choked to death by cars and it's crazy that cars could take up almost the same land area as people.

Singapore announced in October this year that it was cutting the growth rate of all private passenger vehicles to zero. It coincides with a big increase in spending on public transport infrastructure.

Are cars choking your city? Perhaps we need a different approach, and Singapore's policies on this issue mostly make sense to me.