Sometimes the early concepts (usually called "first principles") of calculus can be a bit confusing.

This is "the world's first linear algebra book with fully interactive figures".

The pages take a while to load, but it's worth it!

A few years back I did some mathematics curriculum consultancy work for the newly-established School of Science and Technology, Singapore. Their approach is to incorporate various technologies into an interdisciplinary mix of art, design, media and environmental studies, on top of the national curriculum. I was reminded of that experience when I came across this article on Proof School, in California.

(b) Innovative approach to solving massive problems on an ordinary PC

Russian scientists realized that if they used the GPU (graphics processor unit) of an ordinary PC, they could solve "260 million complex double integrals on a desktop computer within three seconds only". The best a supercomputer can achieve when solving the same problems is 2 to 3 days - and at a much greater expense.

(This is a bit late for last month's Teachers' Day, but still...)

"I have to admit – I wasn’t the best student – but with Dikran Tahta's support I became a professor of mathematics at Cambridge, in a position once held by Isaac Newton."

The puzzle in the last IntMath Newsletter asked about different formulas for producing a given sequence of numbers.

Correct answers with explanation were provided by Phil, Karam and Chris.

A quadratic graph with vertical axes has the general form:

Two parabolas with vertical axes can intersect in at most 2 points.

Now, consider the following graph. Here, I've rotated one of the parabolas: 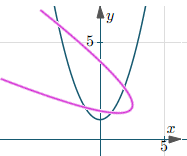 The equation of that rotated parabola has the form:

We can see the two parabolas intersect in 4 points, which is the maximum number of intersection points. 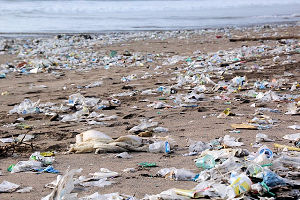 "We have probed the earth, excavated it, burned it, ripped things from it, buried things in it, chopped down its forests, leveled its hills, muddied its waters, and dirtied its air. That does not fit my definition of a good tenant. If we were here on a month-to-month basis, we would have been evicted long ago."

[Hat-tip to PiPo for alerting me to some of the items in this Newsletter.]