Pythagoras was born around 569 BCE and died about 475 BCE.

Pythagoras and his students believed that everything was related to mathematics and that numbers were the ultimate reality and, through mathematics, everything could be predicted and measured in rhythmic patterns or cycles. 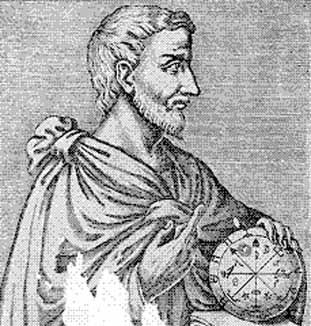 Pythagoras was born on Samos, an island just off the coast of present-day Turkey. It is currently a part of Greece. 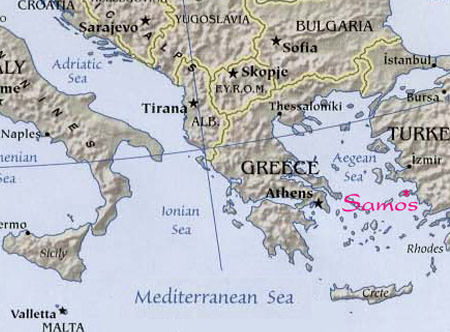 As a young man, he escaped political suppression and went to Croton in southern Italy. He studied in Memphis (Egypt) and Tyre and Byblos in Phoenicia.

On his return to Croton,

...Pythagoras undertook a reform of the cultural life of Croton, urging the citizens to follow virtue and form an elite circle of followers around himself called Pythagoreans. Very strict rules of conduct governed this cultural center. He opened his school to male and female students alike. Those who joined the inner circle of Pythagoras's society called themselves the Mathematikoi. They lived at the school, owned no personal possessions and were required to assume a mainly vegetarian diet

This religious group was partly a school and partly a monastery. They were very interested in music and they used it as a unifying force. The members sang to the god Apollo, used the lyre to cure illness and they read poetry before and after sleep to aid in memory.

Otherwise, they followed a strict code of silence.

Pythagoras gave a much higher place to women than was common in his day. Normally, women were regarded as property and had no rights. In the Pythagorean cult, women were allowed to study and meditate along with the men.

One of the strange rules followed by the Pythagoreans was a prohibition on eating beans. This is quite serious given that they were vegetarians and beans would have been one of the few ways to get any protein. Apparently the rule was not related to Pythagoras' distaste for flatulence. 🙂

Apparently Pythagoras heard some blacksmiths working and noted that the sounds were reminiscent of musical tones. He observed that the anvil sizes were in simple ratios (1/2, 2/3 etc) and theorised from there about why some tone combinations are more pleasing than others. [See also What are the frequencies of music notes? and Harmonics and Sound].

Geometry and that Theorem

A lot of people learn this without ever realising that it is referring to the area of the squares, like this:

Pythagoras didn't use algebra to express this theorem, of course. Algebra wasn't developed for another 1500 years.

The Babylonians actually knew this result 1000 years earlier, but Pythagoreans may have been the first to prove it.

Pythagoras and his school have left a lasting legacy. His philosophies and contributions to mathematics, astronomy and music have influenced scientists ever since.

Pythagoras lived to the ripe old age of 90, no mean feat for the time.