Let's start with an interesting question.

Can you construct the length √7 just by using a measuring stick, a pencil and a set-square? (A set-square is a triangular device used for producing right angles.)

Before we answer this question. First, some background on several very important ancient mathematicians and how irrational numbers came to be.

Length of the Hypotenuse

In the 5th century B.C., mathematicians were fascinated - yet exasperated - with irrational numbers. They believed the only meaningful numbers were the natural numbers (1,2,3,...) and any ratios involving these numbers (like 5/2, 7/9, etc). So they only accepted rational numbers and any other numbers were "unmeasureable". 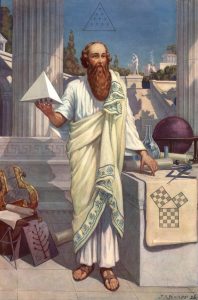 Pythagoras (or someone in his metaphysical school of mathematicians) had shown the famous result that for a right angled triangle, the area of the square on the hypotenuse (in green below) equals the sum of the areas of the squares on the other 2 sides (the 2 light red squares). 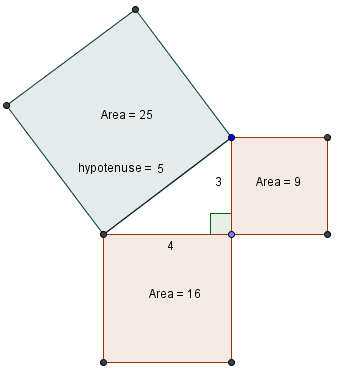 You normally see Pythagoras' Theorem written as follows, where c is the hypotenuse and a and b are the lengths of the other 2 sides:

In my diagram above, we have the common 3-4-5 triangle. Each number is an integer and for the ancient Greek mathematicians, this presented no problem.

However, since they believed irrational numbers did not exist there was a problem when they extended the Pythagorean formula to other values.

The length of the hypotenuse involved a square root:

Depending on the values of a and b, we could easily get irrational values for c. How could they measure these distances if they didn't actually exist?

Theodorus of Cyrene was a 5th century B.C. mathematician and was born around 100 years after Pythagoras. (Cyrene is now called Shahhat, in Libya.)

He apparently proved that the square roots of 2, 3, 5, 6 and so on up to 17 were all irrational, except the perfect squares 4, 9, 16. (Unfortunately we no longer have the proofs.) He also went on to construct these supposedly non-existent distances.

He proceeded as follows.

Start with a right triangle with equal sides 1, giving a hypotenuse of √2 (which of course was a problem, because this distance didn't officially exist):

Then, extend a line with length 1 unit (using your 1-unit measuring stick) at right angles to the first hypotenuse as follows. This gives us the length √3 after we apply Pythagoras' Theorem to the new triangle.

Do it again, and you now get the length √4 = 2. Theodorus had discovered one hypotenuse with a rational number length.

He kept going and found that the next one to have a "rational" length was √9 = 3.

And so now you know how to construct the square root of any number using a straight edge, a pencil and a set-square. 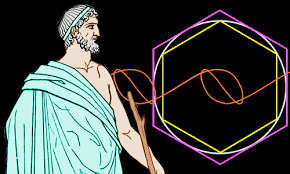 It was one hundred years later when the Greek astronomer Eudoxus (around 370 B.C.) concluded that because we can measure irrational distances (as we did above), then irrational numbers must exist. Problem solved.

It's interesting that throughout history, people have yelled "Impossible!" when some new type of number was proposed. But subsequently, mathematicians have shown that not only are many of those numbers possible, but they have proved to be very useful.

Apart from irrational numbers as we discussed above, people originally did not believe in the existence of the number zero, imaginary numbers and "infinitesimals" in calculus. But in each case, they have been accepted as true numbers and used in many real applications.