Intersection of 3 planes at a point: 3D interactive graph

I recently developed an interactive 3D planes app that demonstrates the concept of the solution of a system of 3 equations in 3 unknowns which is represented graphically as the intersection of 3 planes at a point.

We learn to use determinants and matrices to solve such systems, but it's not often clear what it means in a geometric sense. Most of us struggle to conceive of 3D mathematical objects.

Technology to the rescue.

The new app allows you to explore the concepts of solving 3 equations by allowing you to see one plane at a time, two at a time, or all three, and the intersection point. You can also rotate it around to see it from different directions, and zoom in or out. 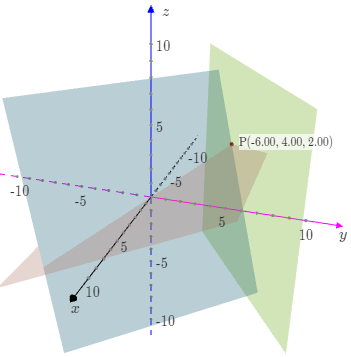 Three planes intersecting at a point

On the other hand, solving systems of 2 equations in 2 unknowns is represented by the intersection of 2 lines (or curves), which is relatively more straightforward.

One Comment on “Intersection of 3 planes at a point: 3D interactive graph”