Most students struggle when trying to understand 3D cartesian coordinates, especially when diagrams in text books are static, and in 2 dimensions only (of course).

In the introduction to 3D graphs, I gave the example of the point P (2, 3, 5) . The 3D interactive graph allows you to explore what a point in 3 dimensions means and helps to orientate those unfamiliar with the xyz-coordinate system.

You can vary the x-, y- and z-coordinate of the given point and rotate the axes, as well as zoom in and out.

This is quite a simple interactive and I hope to introduce more involved ones in the coming months.

I developed the applet using Three.js, a 3D javascript library. As such, the applet is cross-platform, cross-browser and mobile friendly.

When I first wrote the section on 3D Space in the Vectors chapter, I wanted to ensure I chose a "good" orientation for the 3 axes. By "good", I mean that I was using a proper convention and that it was commonly used.

For interest, I looked at what Google Images returned for a search on xyz axes. I'm using the results of that search below.

When I first learned 3D geometry in secondary school, we started with the familiar xy-axes and drew the new z-axis coming "out of the page" towards us, like this (let's call it Orientation #1):

At times we would see the axes rotated around the y-axis, like this one (let's call it Orientation #2): 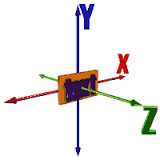 But that was OK - the y-axis was still at the top, so we didn't get lost. 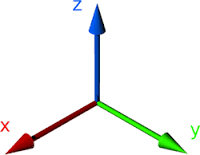 This change of orientation was quite disconcerting at first. I kept drawing points, planes and graphs the wrong way round.

Now I'm more used to this orientation (let's call it Orientation #3) , and it seems that it's more common to have the z-axis going up. 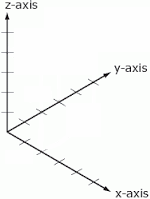 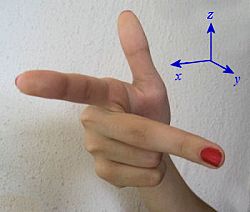 (Yes, you have to contort your hand around somewhat to ensure each of the above orientations work, but they do.)

The following one (found in Google's index of such axes) fails the right-hand rule: 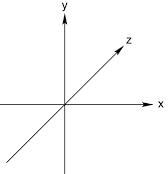 (To be fair, it is possible the z-axis is coming out of the page towards us, but that's not the impression I get.)

Is a vertical z-axis more common?

The calculus text books by Kreyszig, Washington, Mizrahi/Sullivan and Thomas/Finney all use Orientation #3, which is why I used that orientation as well. 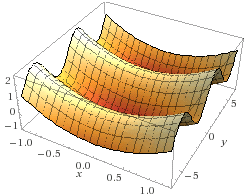 Geogebra has the same default orientation. Here's the same graph using Geogebra, which doesn't appear to have an option for naming the axes (it does for 2D axes). 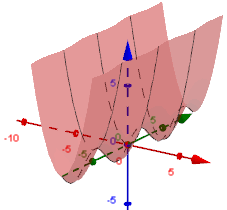 Up next is Scientific Notebook, which uses x to the right and down, and y-axis to the left and down, with z up.

This means it fails the right hand rule! At least the axes are labelled. 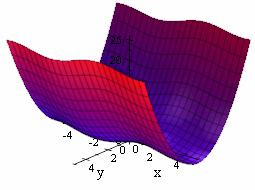 Matlab's plot on first glance appears to be the same as Wolfram|Alpha's, but in fact, the positive y-axis is going off to the left and up.

It obeys the right hand rule, but this is not a common orientation. 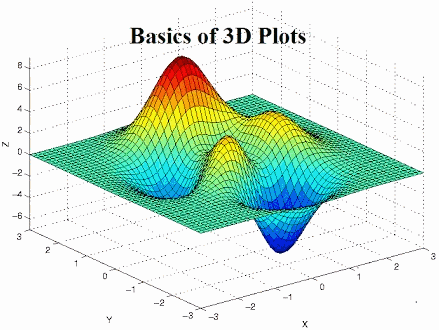 Why does it matter?

As I mentioned earlier, a lot of novice learners have difficulty imagining planes and other surfaces in 3D. Presenting graphs in a myriad of orientations doesn't help.

The link to the interactive graph again: