Butterfly map of the world

In the heady early days of powered flight one hundred years ago, the Panama-Pacific Exposition proposed an "around the world in 90 days" air race. It was planned for the spring of 1915.

Typical aircraft of the time included the famous Sopwith Camel. 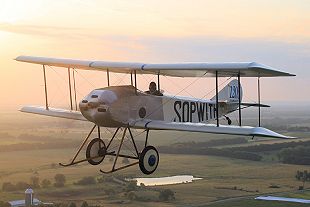 Architect and mapmaker B.J.S. Cahill (1866-1944) plotted the proposed flight path for this "circumaviation" event on his Butterfly Projection world map, also known as an orthomeric or octahedral projection.

Here is some of the publicity for the event, showing the Butterfly Map: 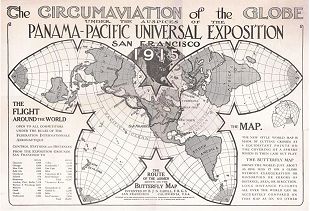 The above planar (flat) map was produced by cutting the spherical globe in 6 places (4 on the equator and 2 at the poles), each in a cross shape, as follows: 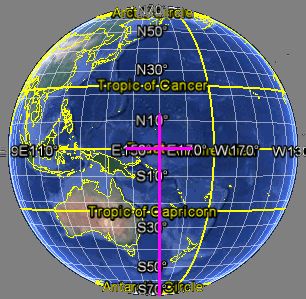 Here's the publicity map showing a bit more detail and the flight route: 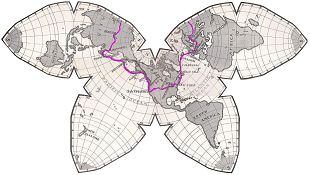 In the corner of the map it shows what it will look like when joined together:

The claim in the text on the poster is:

The new style world map is made by cutting crosses at 6 equidistant points on the covering of a sphere which is then laid out flat.

The Butterfly Map shows the world just about as one sees it on a giobe without exaggeration or distortion or errors of distance, area, or direction. Long distance flights all over the world can be accurately compared on this map as on no other.

Let's test this claim. Here are some distances I measured using the Butterly Map, and the actual great circle distances:

Considering my measurements on the cut-out map were quite rough, the scale is remarkably consistent.

Conclusion: The claim is reasonable!

Cahill wasn't the first with this idea. In the early 16th century (when many people still insisted the world was flat, and much of it remained undiscovered by the Europeans), Leonardo da Vinci developed a butterfly map based on the Reuleaux triangle.

We shouldn't always present the world map as rectangular, with the USA (or any other country) always in the middle. Maps come in many varieties, each has its advantages and each type gives an insight into our world.