Hans and Ola Rosling: How not to be ignorant about the world

In this latest installment, he triggers the audience to think more deeply about how the world has changed over the years. He has a particular interest in population, health, poverty and income, and how such things have intertwined.

After getting his audience to participate via clickers, he proceeds to try to clarify their understanding of wealth distribution and poverty.

His son Ola joins in to outline where he believes the misconceptions come from. It's probably not a good idea to tell people all the time they are ignorant (as Ola seems to do), but it's actually very important that people have better skills at scanning and interpreting data in its many forms.

It's always interesting to see what people say about such videos on YouTube. One guy ranted about this chart: 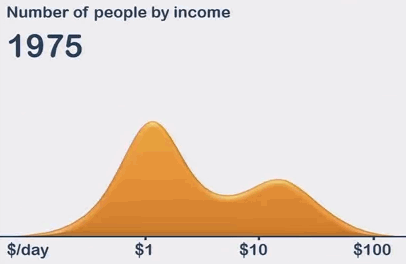 He wrote as part of a very critical comment:

Clearly this person was not listening during the logarithm lesson in his school days, where he would have learned about Semi-log and Log-log Graphs.

It's sad that an essential data presentation concept like this is poorly understood by many.

The chart is highly simplified for the sake of Rosling's argument. Perhaps that is a mistake - what does the real data actually look like when plotted? It may have been more convincing.