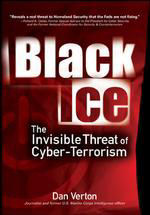 The Invisible Threat of Cyber-Terrorsm

The scenario in the opening chapter is chilling.

In the "near future", terrorists hijack fuel tankers and use them to destroy natural gas facilities and electricity plants. Simultaneously, hackers bring down several of the systems that control natural gas pipelines and the electric grid. Other attacks on DNS servers throughout the US bring all Internet traffic to a standstill. An electro-magnetic pulse bomb wipes out all electronic devices within a 3 km radius. This causes chaos as all computers, signaling equipment, refrigerators, heart pacemakers, car ignition systems and cell phones cease to work. Hospitals cannot function and emergency services have no communication. The most important outcome for the terrorists is that the economy is crippled.

Dan Verton is an investigative reporter for ComputerWorld magazine. He has exposed glaring weaknesses in the systems which keep the US running - oil, water, electricity, computers, travel and communication.

Some of these vulnerabilities include:

Soon after the 9/11 attacks, Osama bin Laden said that his main target is the US economy. After reading this book, it is clear how future attacks could be carried out. In fact, the book is probably being used as a textbook for al-Qaeda trainees already.

Verton describes at length what the US is doing to reduce the cyber-terrorism threat. He talks about the intelligence gathering at several super-secret government agencies. He describes the destruction of Ptech, a company that was accused of connections with terrorism, but was subsequently cleared of all charges. Too late - the unfortunate Lebanese guy who ran the company (Oussama Zaide) has had his life ruined.

The book is well worth a read - and very scary.