The Solar Taxi is a 3-wheeled solar powered car that started its world journey on 11 July 2007. The car is driven by Swiss teacher Louis Palmer. 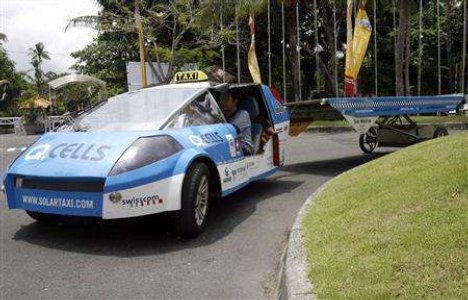 The official site is solartaxi.com [but it is a terrible site; badly organised (a hodge-podge of languages) and with some links going to pure advertising sites]. After a lot of persistence, I finally managed to find the English language blog Solartaxi (which has since disappeared).

I was surprised at first to read some negative comments from Off-Grid [no longer available] about Solar Taxi, but I have to agree that there seems to be a large "hype coefficient" with this venture.

However, I wish Palmer well and I hope the journey raises awareness of what has been possible for many years, and must become a reality soon.

I saw the drama Oil Storm last night. This is a chilling story (made in 2005, before Katrina) of some very real possibilities, some of which have subsequently come to pass:

See the summary of Oil Storm on Wikipedia, and a trailer.