In 1878, Augustin Mouchot displayed his solar-powered engine at the Universal Exhibition in Paris.

He had been teaching secondary school mathematics in France for most of his career, when he developed an interest in solar power.

Coal had been the main energy source of the Industrial Revolution, and like many others, Mouchot realized it was a finite resource. He set about researching and developing engines that would run on solar power.

The engine in the following image uses a parabolic dish that concentrates sunlight at a point. Water is passed through that point and becomes hot enough to drive the steam engine shown. 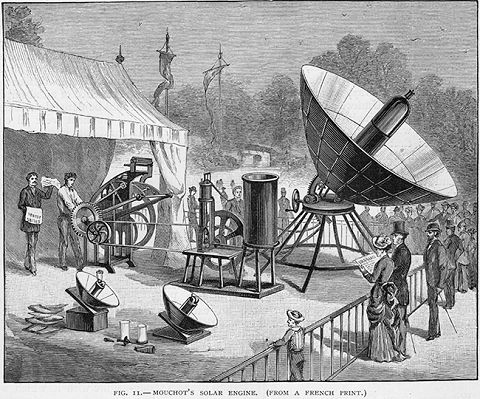 He was also able to produce ice using another solar-powered device, and for this he won various awards.

Unfortunately, the price of coal dropped, and oil was even cheaper to produce, so interest in Mouchot's solar-powered devices faded away and government funding dried up. Mouchot went back to teaching mathematics, and the world lost yet another opportunity to use cheap, clean and renewable energy sources.

"Cheap" coal and oil has actually been very expensive for our planet.

In the 1750s, M. de Bernieres presented a very large magnifying glass, over a meter in diameter, to the King of France. It was so hot that "forged iron exposed to its focus was fused in two seconds". [Source: Belfast Monthly Magazine, 1808] 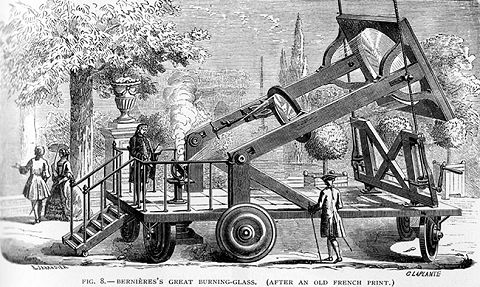 China is now putting a lot of effort and money into solving its severe pollution problems. They built their "modern" economy on energy sources that were "cheap", but realized quickly that there are many unseen costs.

There is great potential for jobs in the renewable energy sector, especially in the research area. Mathematicians will certainly be needed to make solar, wind and wave devices more efficient and cheaper to produce.

If only the world moves in the right direction...