So why is it that many diagrams confuse students even more?

Edward Tufte is famous for analyzing - and improving - the design of many different types of visual data.

Here are some of his thoughts in response to a question on his "Ask E.T." forum:

The purpose of analytical displays of information is to assist thinking about evidence. Consequently, in designing analytical graphics, the first question should be: What are the evidence-thinking tasks that this display is supposed to serve?

Analytical graphics should be constructed to serve the fundamental cognitive tasks in reasoning about evidence: describing the data, making comparisons, understanding causality, assessing credibility of data and analysis. Thus the logic of design replicates the logic of analysis; design reasoning emulates evidence reasoning.

Here's a list of Tufte's excellent books. I strongly recommend them!

In these books, he outlines several principles for good design, based on a wide range of interesting examples.

Make it easy for the viewer to compare

I came across the following graphic recently. It's from an article that talks about what LinkedIn users do when they find out about a new company. The article, "Why Should You Use LinkedIn for B2B Generation" has quite good analytical graphics for the most part.

But then I saw this chart and couldn't believe how terrible it is. 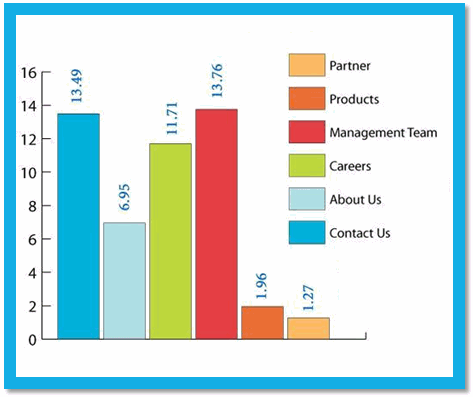 The text caption says "Percentage of Visitors from LinkedIn and their Intent".

The bars are color-coded and the viewer needs to go to the legend to figure out which bar is which. The order of the chart bars (left to right) is the reverse of the legend order (bottom to top).

The bars are not sorted in any order (that I could discern). At the end of the day, we want to know where LinkedIn viewers are more likely to go when they arrive at a site. The strange order means we, the viewers, have to do a mental sort. The highest bar, at 13.76, is red. We then have to go to the legend to find that red means "Management Team". Next, and just behind, is blue and that represents the percent who went to the "Contact Us" part of the site. Are you tired yet? Would you give up at this point? I did.

While it is a good idea to add data values on the chart, they have been flipped to vertical, which adds unnecessary cognitive load. (Each of the numbers has been corrected to 2 decimal places. There is no problem with space if they were horizontal.)

There is no indication (on the chart) about what the numbers up the vertical axis represent.

For a color-blind person, the colors used would be very confusing. (See Math and Color-Blindness.)

Finally, there is no title on the chart.

Here's an improved chart, which requires a much lower cognitive load. 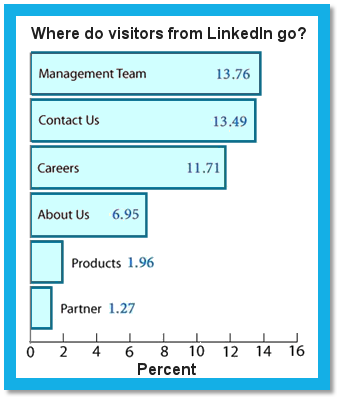 I hope you agree it is now more informative and easier to compare where LinkedIn-based visitors go.

Here's an overview of his books.

Tufte was appointed by President Obama to the Recovery Independent Advisory Panel. This Panel tracks and explains $787 billion in GFC recovery stimulus funds.

Math teachers - and developers of math text books - should be more aware of the importance of good analytic graphic design.

We should also teach such concepts more in schools. Our students need greater skills in designing and interpreting visual data.