Color blindness is caused by a problem in the red, green or blue cones of the retina and is most often genetic in origin. It affects males almost exclusively.

Color blindness is not evenly spread across different ethnic groups. Around 8% of Caucasian men, 5% of Asians, and 4% of African males have the most common type of color blindness — the inability to tell the difference between red and green.

As an example of the difficulties faced by those who cannot distinguish red and green, here is how a red apple is perceived by a deuteranope (someone with the most common red-green color blindness) . 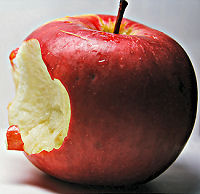 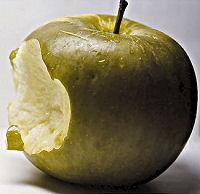 Red apple as perceived by a normally sighted person (left) and by a color-blind person (right).

Now we see how a green apple is perceived by a deuteranope. 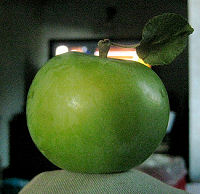 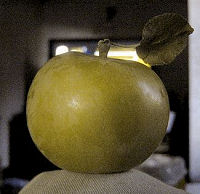 Green apple (left) and as seen by a deuteranope (right).

As you can see, there is very little difference in the perceived color for the 2 apples and therefore it must be quite a challenge to go grocery shopping. We distinguish many vegetables (including the quality of those vegetables) by their color.

Note that color blind people see some color (it's not blank or invisible), but they don't distinguish green and red.

Check how color blind people see your images and text

I obtained the apple images on the right above using the excellent facility at VisCheck, which has since disappeared. You can upload any image and see how it will look to people with different kinds of color blindness. A possible alternative: Color Blindness Simulator

Colors of the Rainbow

Here are the rainbow colors, with the way a color blind person would see them. 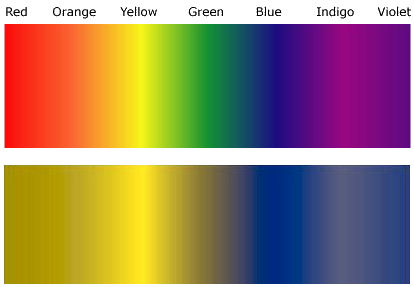 Shinobu Ishihara published tests for color blindness in 1917. They consist of circles with numbers embedded using different colors, as follows.

Note: If you have trouble seeing numbers in the above plates, it does not necessarily mean you are color blind. Each computer monitor has different settings and capabilities. Color blindness tests should only be done using paper print-outs.

Let's now look at the implications of color blindness for math students.

Here's a pie chart that could be used as part of a statistics lesson. The colors are unsaturated, making it difficult to read.

And now for the version that a color blind person sees.

Pie chart as seen by a deuteranope.

What if the teacher asked a question like "What percent is represented by the orange sector?" The brownish colors are almost indistinguishable and this would make interpretation of this chart quite difficult.

What colors should we use?

According to Okabe and Ito in the very useful article Color Universal Design, the following are good practices to follow when developing materials.

No matter what the background color of your presentation, Okabe and Ito advise to avoid red, orange, yellow, yellow-green and green, if such colors are important for distinguishing information. That last bit is important - you don't need to avoid these colors if they enhance the visual appeal for normally sighted people.

A lot of presenters use color for emphasis, but it can be lost on some viewers.

For example, the following could possibly look all black and so the emphasis is lost.

The following at least will be clearer.

But please don't use blue too often on Web pages, since this is traditionally the color for links and should be avoided.

Back to the Pie Chart

Let's go back to our pie chart and try to improve it. Here's the chart again with better, more saturated colors. I have used magenta (equal amounts of blue and red, or #ff00ff in color hex) for one of the sectors. Note it looks light blue to a color blind person. Also observe how dark red (#c00000) and light green (#00ff00) appear.

Pie chart with saturated colors (left) and how it appears for a color blind person (right).

It's better, but far from perfect.

The legend (the dots on the right of each image) adds extra cognitive load for everyone. If we label each sector as follows, it is easier to read and understand.

Here's a graph from a page I wrote illustrating Vector Addition. (We're adding 2 vectors, A and B, and the resultant vector is R.)

I chose primary colors (blue and green for A and B), and "red" for the "resultant" (R), which is fairly commonplace. But look how disastrous it is for a color blind person: 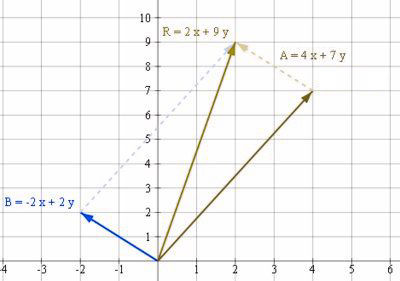 In this case, the vectors are clearly labeled, but the colors do not help at all.

I changed the script to replace green with black. I'm still using red (in the original) for the resultant vector, but I think you'll agree all colors are distinguishable now. 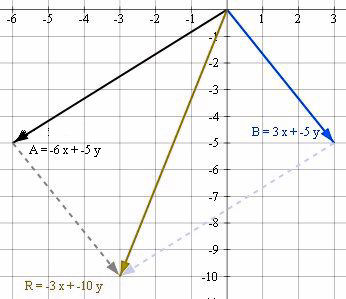 Blue, black and red vector arrows, as seen by a color blind person.

Here's another kind of line graph that's found in statistics. It shows a projection of the population by age for the USA. 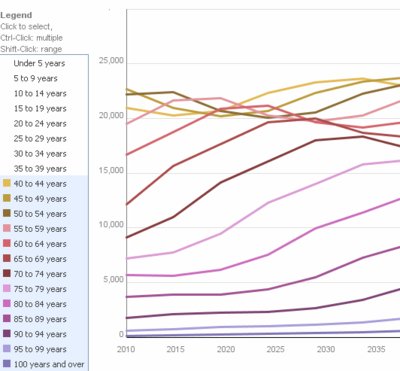 Here's how it looks to a color blind person. 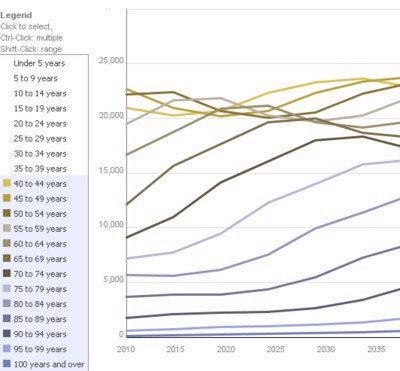 Line chart - as seen by a deuteranope.

As we've seen in the other examples, it's better to label the lines in a chart (rather than use a legend), and to use different patterns (square, triangle, cross, etc) on each line. This is called redundant coding, since we are differentiating the information in more ways than one.

Here's a better version of this graph, with redundant coding.

I didn't change the colors (since that would have produced limited benefits).

It's also best to use thick lines when drawing graphs, since thin ones are more difficult for color blind people to see.

Even normally sighted people have difficulty reading certain color combinations. Particularly on Powerpoint slides, it is irritating trying to read red or dark blue text on a dark background, something like this:

The usual rules apply for Powerpoint slides - use highly contrasting colors - the best is black on white. Here's the same text in a form which is easier for everyone to read (black on white):

We can't assume everyone in an educational setting can see things the way we see them (in fact, that's almost always the case on many levels, not just color perception!).

Proper labeling of graphs, charts, equations and avoiding indistinguishable colors will certainly help improve readability for all learners - not just the color blind ones.

I realize now I need to go back and fix a lot of my own graphics so they are more readable.

Don't get me wrong - still use lots of color in your presentations, but keep in mind the needs of those 5% or so of readers who are color blind.

Please comment: Are you color blind? I'd love to hear your feedback or corrections on anything I have written here.

Red apple by Bulinna [original no longer available] CC BY 2.0

See the 19 Comments below.

19 Comments on “Math and color blindness”