Before Athens could host the 2004 Olympics, there was a need for extensive infrastructure development.

While constructing the new underground railway (metro), they unearthed many archaeological sites that were previously unknown. So there are several interesting museums in the metro stations, displaying various artefacts found nearby.

The same thing happened when the airport was being built in the late 1990s. The small museum in the airport describes how the locals lived during the last few thousand years.

This large pot was found during the excavation. 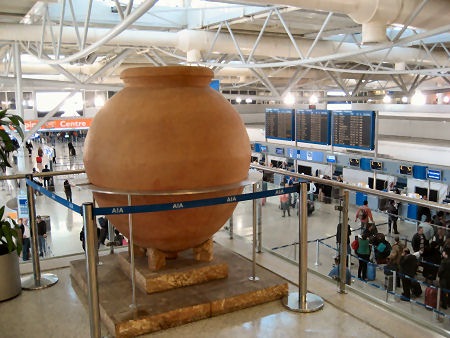 It was a pity that the weather came good just as I was leaving Greece. After takeoff we can see evidence that Greece is still a largely agrarian economy. 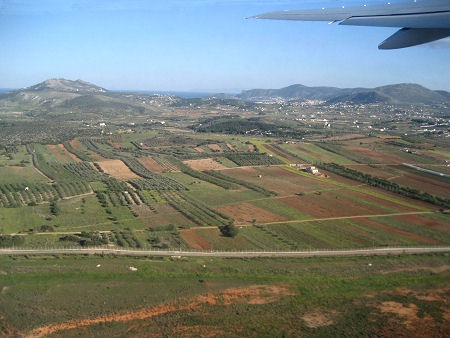 Mykonos Island is south east of Athens. This is a well-travelled tourist haunt, with a higher density of houses compared to most of the Greek islands. 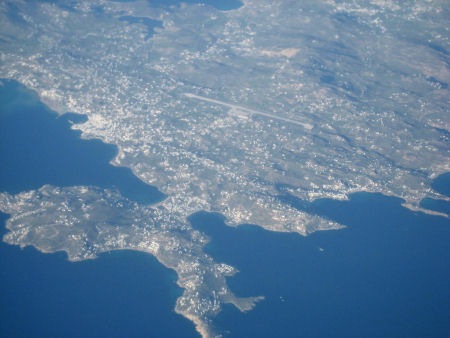 Resembling some sort of caramelised latte, these are snow-covered mountains in Turkey. I made a mental note to include Turkey in my next visit to this region. 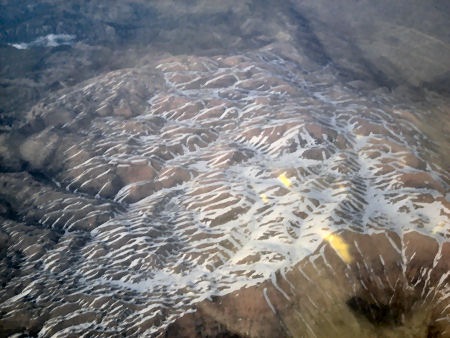 As the sun set, a curious thing happened. There was a mysterious shimmering light on the aircraft wing. I'm still wondering what caused it.

The route taken by Emirates passed over the southern portion of Cyprus. After the Turks invaded the northern part in 1974, there has been an ongoing feud about the sovereignty of Cyprus. The Republic of Cyprus effectively controls only 59% of the island.

The following photos are from the excellent flight information in Emirates. 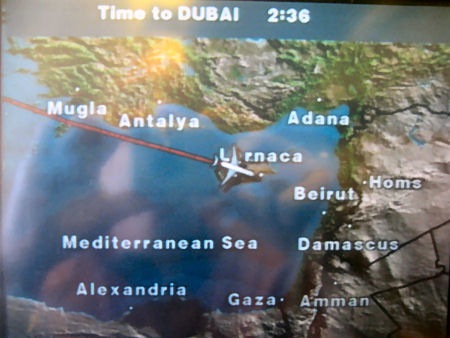 The rest of the journey to Dubai skirted around the (politically) hottest Middle East spots. Avoiding Lebanon and Israel, we head over Syria and Jordon, towards Saudi Arabia. Notice that there is no mention of Jerusalem on the map... 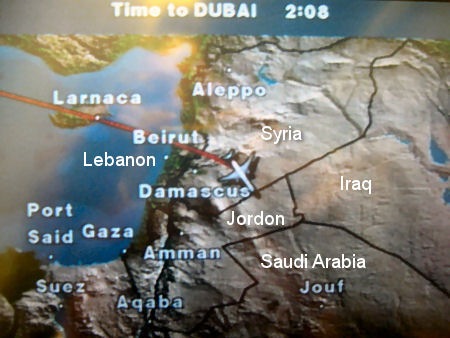 It was weird flying parallel to the border with Iraq and thinking about all that was going on down there.

It was night-time by now and the flames that lit the dark provided abundant evidence of oil wells.

I was sitting next to a Canadian military guy who was stationed in Afghanistan. He was on 2-weeks' leave and headed for new Zealand. He was torn between his sense of duty and the insanity of the situation in Iraq. 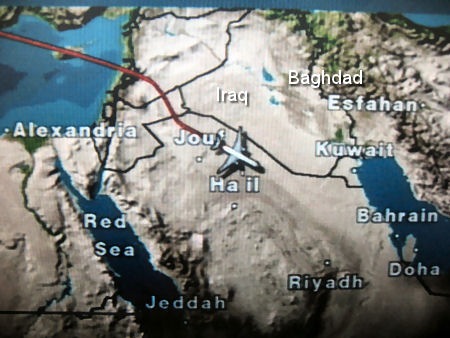 With the well-known (notorious?) Karbala and Basra slipping by, I looked forward to the midnight touchdown in Dubai. 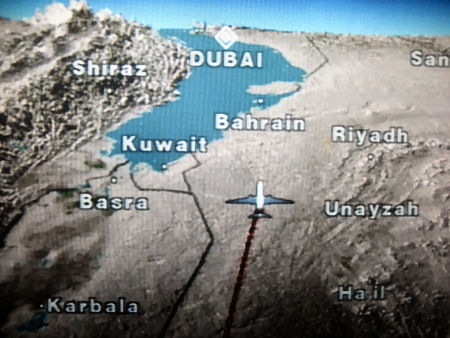 I was amazed how busy (and how disorganised) Dubai airport was in the middle of the night. It was hot and unpleasant, and a great relief when I finally found the Somali guy who was there to pick me up from the hotel.

Dubai airport is a huge place. Our bus ride from the terminal out to the plane was around 20 minutes. They are going to build another airport in the southern part of Dubai, less than 1 hours' drive away. That place is incredible.