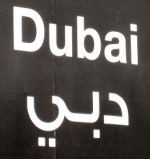 Dubai is an amazing blend of Arabic traditionalism & Western modernism. The foreign population exceeds 80% of the total, and around 40% are construction workers, mainly from Pakistan, India and Bangladesh.

I didn't want to stay in the gleaming modern hotels (affordability was a consideration here too, of course 🙂 ) and I ended up in the charming Al Hijaz Heritage Motel near Dubai Creek.

It turns out that the hotel building was previously owned by Dubai's royal family and the Sheikh lived here. It is still in government hands and leased as a hotel. 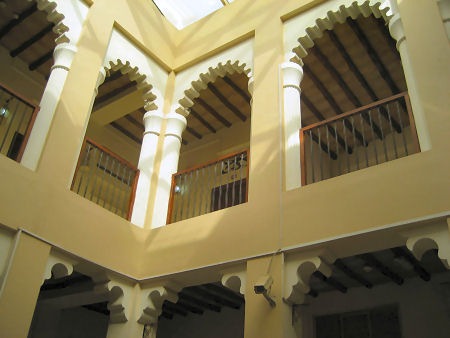 Dubai's first school was built next door to the present-day hotel and the Sheikh's children attended there. It is now a museum that demonstrates how early education was a very strict affair. Highest grades were given to those who could recite the Quran the best.

Dubai's education system is modelled on India's and there are many Indian teachers there. The Gulf News reported that schools affiliated with India would be rated on how well the students performed in mathematics and science. 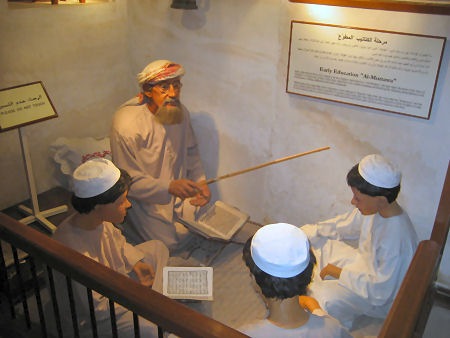 Many of the residents of Dubai are African. This guy was selling Aladdin-style shoes. 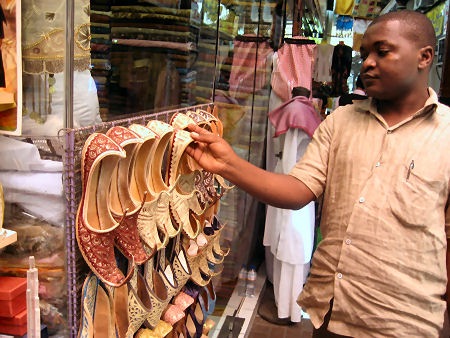 Transport across Dubai Creek is by abra, open boats that leave every few minutes once they are full.  The breeze off the water was welcome as the temperature was already in the mid-30s, even in spring. 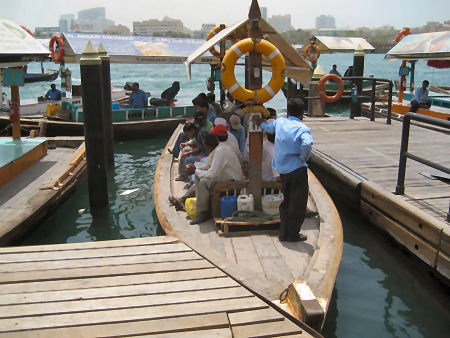 Dubai Museum is housed in the original walled city of Dubai, built in the early 1800s. Hundreds of small birds found shelter from the heat in crevices in the walls. 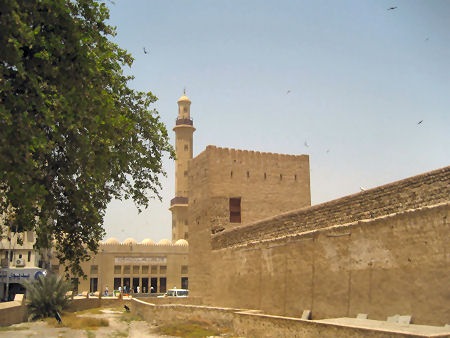 Dubai's early fortunes were built on the pearling industry, but it collapsed when cultured pearls became popular in the 1920s. The divers had to be fully covered so that they would not be bitten by octopus and other sea creatures. 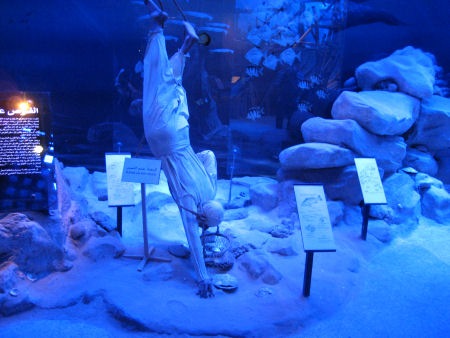 The museum also had an interesting display on water supply. The traditional source of water is the wells in the mountains to the east (bordering with Oman), but the Dubai government has invested heavily in desalination plants in more recent years.

The obligatory souvenir shop in the museum was a colourful and ethnic affair. 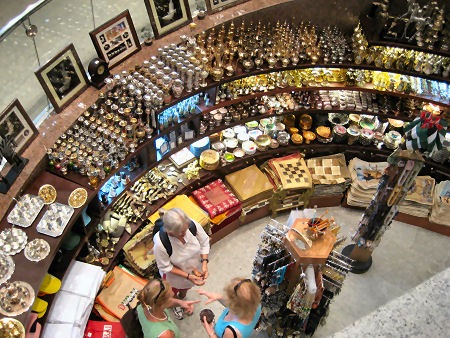 This is the courtyard of an up-market restaurant in the walled city. 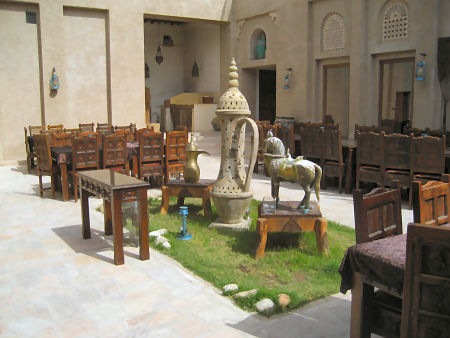 These shisha (aka hookah) water pipes are commonplace in restaurants in Dubai. No, they are not there just for the tourists, and no, I did not imbibe. 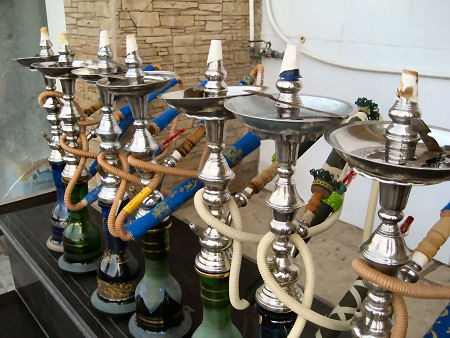 Dubai completely shuts down on Fridays for prayers. I went out to find some lunch but everything was shut  except for the mosques. This one was so busy that worshippers spilled out onto the street. 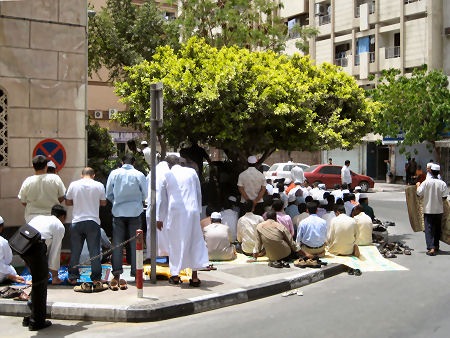 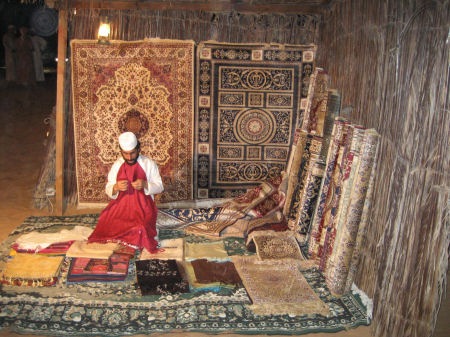 I was impressed by the quality (and reasonable price) of pure fruit juices that you can get in Dubai. 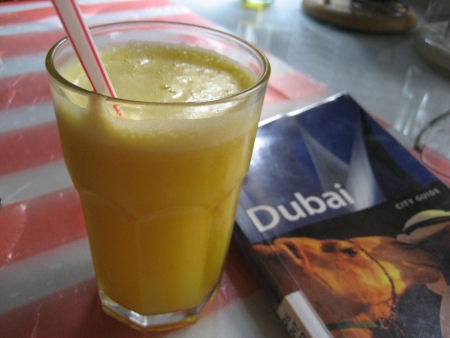 At the hotel they tried to serve me (boring) Western breakfasts. I asked for something local and this is what they brought me. It tasted a lot better than it looked. Nearly all the staff at the hotel were African. 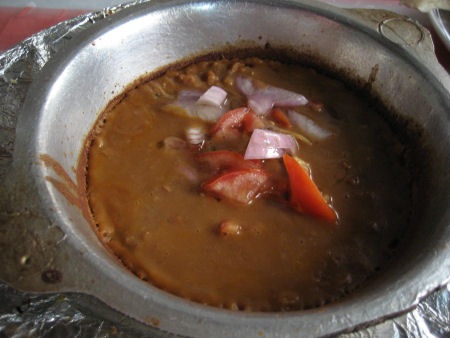 I asked the chef what my breakfast was made from and after several attempts to tell me in halting English, he showed me this can of foul (from China). 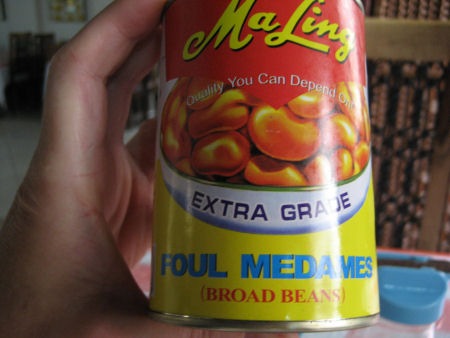 I found a great little cafe by the Creek and ordered the "mixed grill". It had a nice tang to it. 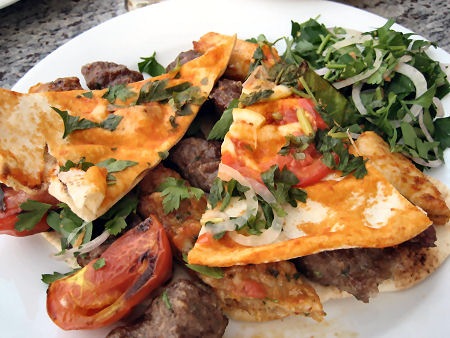 There are many stores selling nuts and dried fruits. They looked superb. 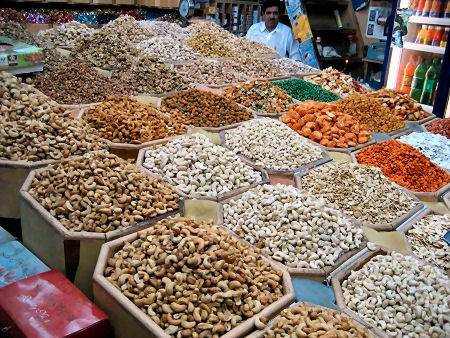 I teamed up with a German guy who was staying at the same hotel. We took local buses which were crammed with construction workers.

Notice the icon for "women" on the perspex divider? Men are supposed to sit at the back and women in front. The guy pictured sitting there in the wrong section seems to have missed the point. 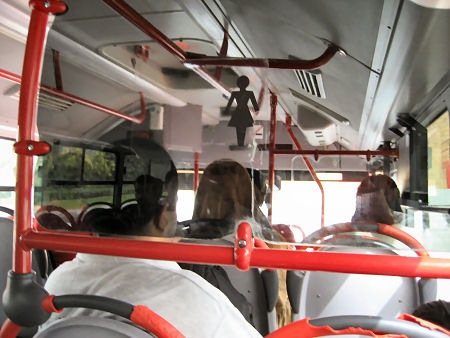 A curious aspect of Dubai culture is the amount of gambling that goes on. In these 2 posters you can win a Lexus or a kilo of gold. Dubai Duty Free was proudly offering "Win $1,000,000" on its shopping bags. Now, with Islam's compete ban on gambling, this is interesting... 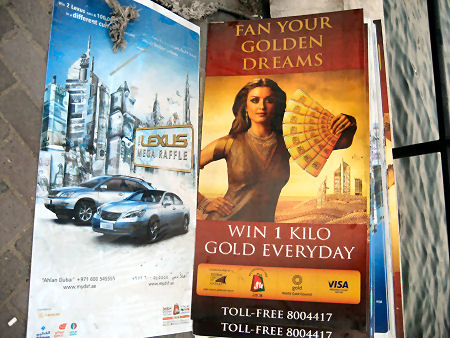 Dubai was an amazing place. It's only got sand, heat and petro-dollars and they have turned it into a multi-billion dollar real estate magnet.

I enjoyed my visit to Dubai, but I'm not sure that I want to live there.