Nafplio is a delightful Venetian city in the Peloponnesus (Peloponnese) in Greece. It is about 90 minutes by bus from the city of Korinthos (Corinth). 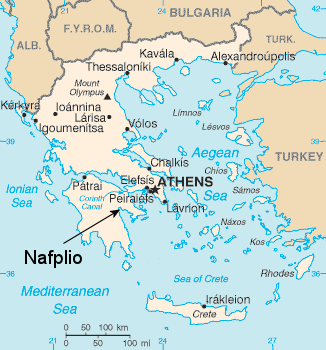 Nafplio was the first capital of the independent Greek state in the 19th century. Before that, it was ruled by the Franks, the Ottomans and the Venetians.

The most striking feature of Nafplio is the fortress of Palamidi on top of a steep rocky outcrop. Built by the Venetian rulers around 1700, it is an extraordinary piece of engineering. 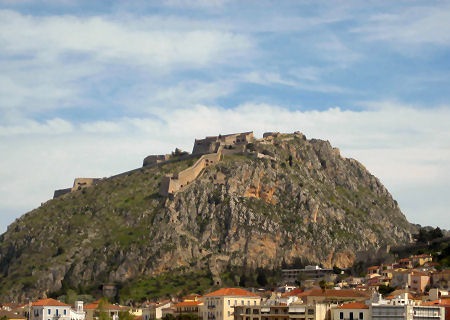 There is another minor castle in Nafplio called the Acronafpia. It is not as grand as Palamidi castle, but it has its own charm. 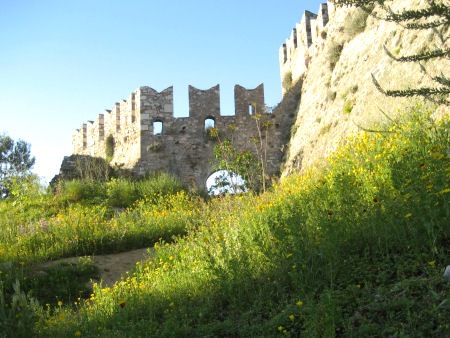 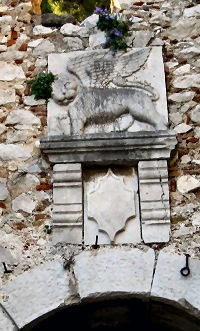 The 3rd castle in Nafplio's harbour is called Bourdzi, built during the 1400s.

The sandy dust from Africa that had dogged the Athens and Santorini legs of my trip finally blew away and it was nice and sunny in Nafplio. At last I could see the horizon. 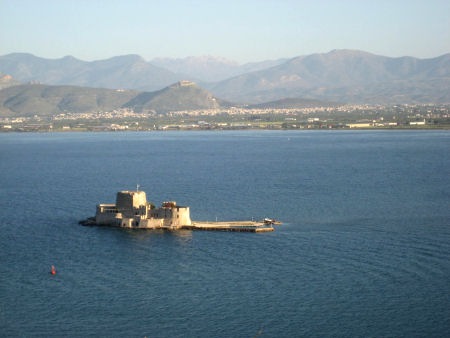 In April, Greece has abundant wildflowers, making it a good time to go. 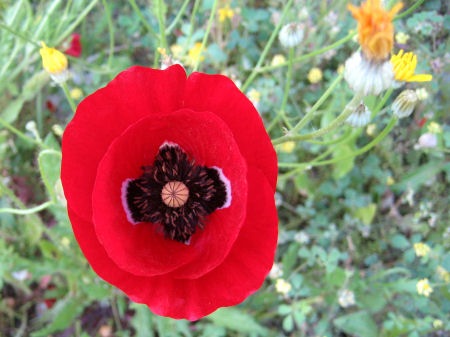 I begin the climb up to the Palamidi Fortress through this arch. The photo looks back towards the Old Town of Nafplio. 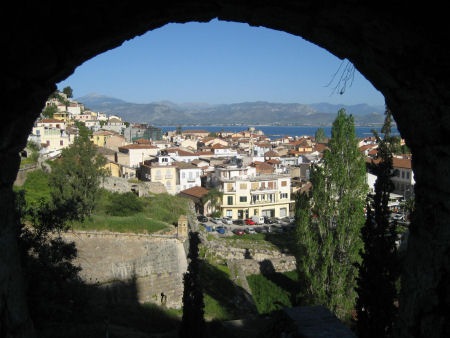 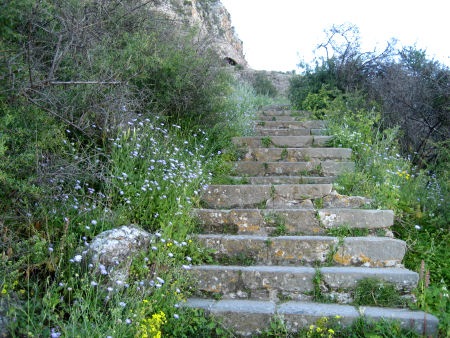 It must have been extremely difficult to build the Palamidi fort in the first place. However, the experience of being holed up in the fort when it was under siege must have been something else. There was barely enough room to grow food up there and I imagine water would have run out quickly too.

I can just imagine the poor souls who would have been forced to go down to the port and gather food and water for the soldiers and townspeople in the fortress - a very difficult and dangerous task indeed.

The fortress was used as a political prison for a time. 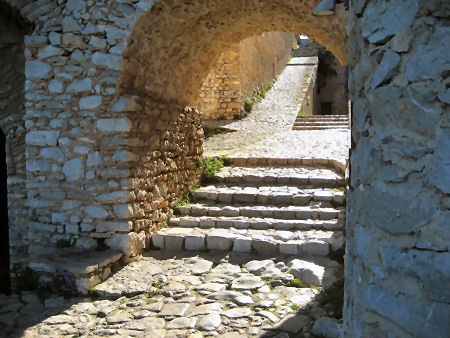 Nafplio's old town from the top of the fort. The mountains in the far distance still had snow. 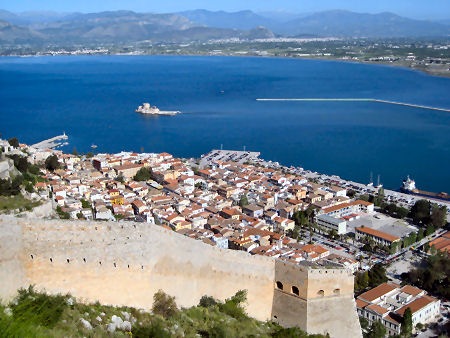 Back down near sea level, I spotted this unkempt Nafplio gem. 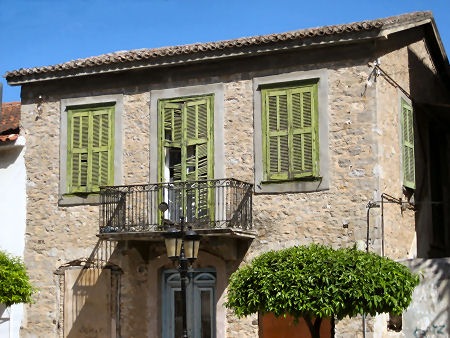 Australian eucaplytus trees are in abundance in Greece. They were chosen since they grow pretty much anywhere, especially in dry and hot conditions. However, they are a terrible fire hazard due to their high oil content.

During the extremely hot Greek summers in 2006 and 2007, forest fires raged out of control, made worse by the highly flammable eucalypts. 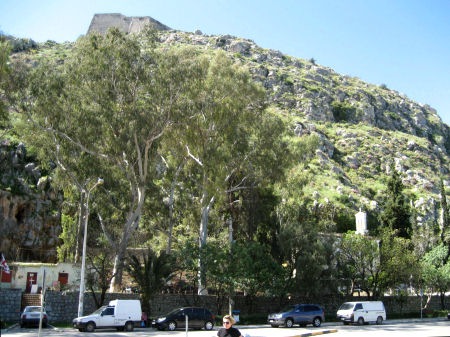 One of the hotels in Nafplio is built on top of the hill near the Acronafpia fortress. At sea level, there is this James Bond-style hotel entrance... 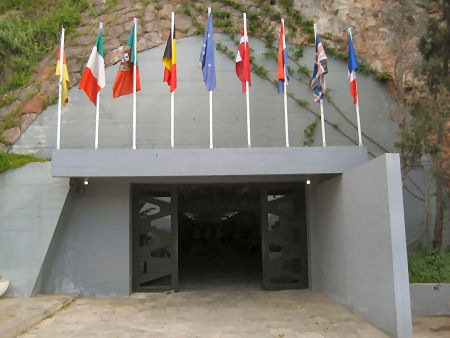 You walk into the bowels of the rocky hill and come across these elevators that take you to the hotel lobby. 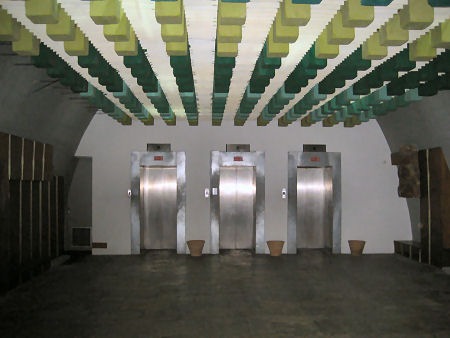 The hotel in question has an impressive infinity pool. 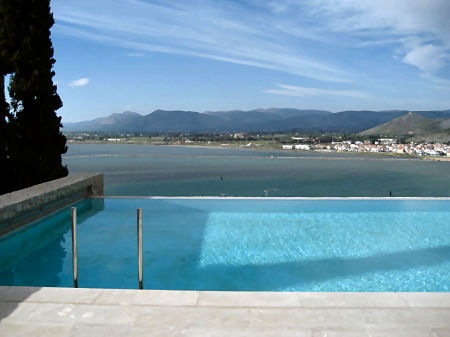 I'm early for dinner at this al fresco restaurant. 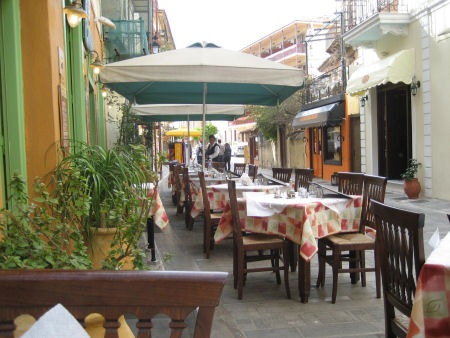 Much of what I ate in Greece included abundant cheese and ham. 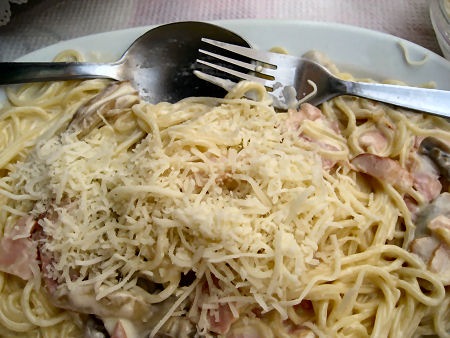 I enjoyed my visit to Nafplio. It had a pleasant atmosphere and interesting history.

It was a shame that most of the museums were closed, but I expected that since I was there before the main tourist season. I was glad to be there in April before it was too hot and too crowded.