After Athens, I spent 2 days in Santorini on my recent trip to Greece. A short flight (only about 20 minutes) takes you from Athens to Santorini. I decided against taking the ferry because the times were not convenient. 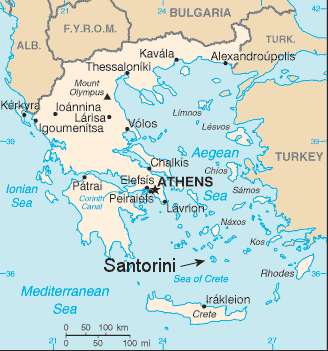 The main township of Thira is precariously perched on the edge of a volcanic caldera, created in 1630 BC by a massive explosion. The sides of the volcano collapsed and the sea flooded into the mouth of the volcano. Eight more eruptions have happened since then, the most recent in 1950. 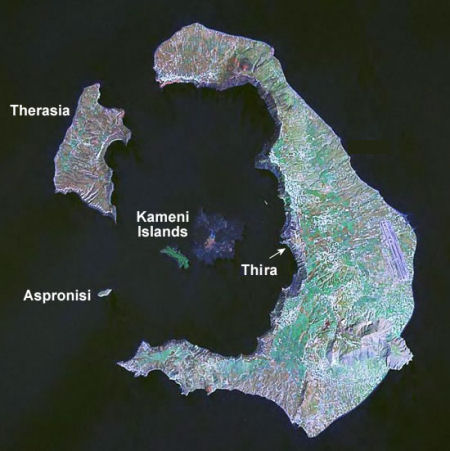 One of the first sights in Santorini was this surreal shot of armless mannequins. In the background is Nea Kameni, the center of the volcano and the site of the 1950 eruption. The outer rim of the volcano proper can be seen beyond Nea Kameni. A cruise ship waits as its passengers descend on Santorini for their 1-hour obligatory dash through the tourist shops. 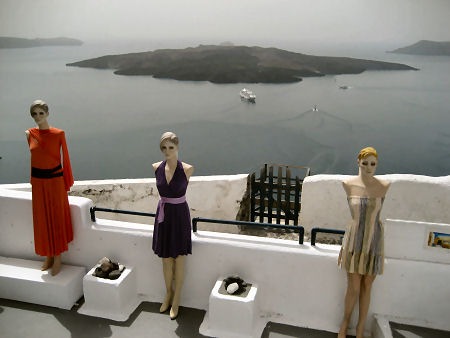 A church sits on the edge of the volcanic cliff. 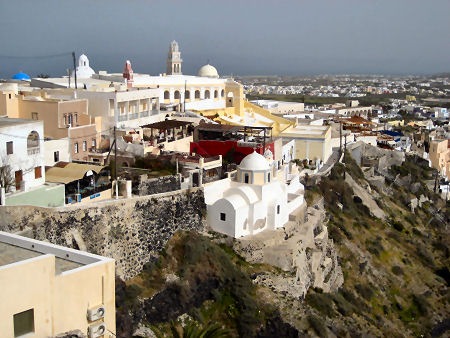 Typical of Greek church architecture, 3 bells are used to summon the faithful. 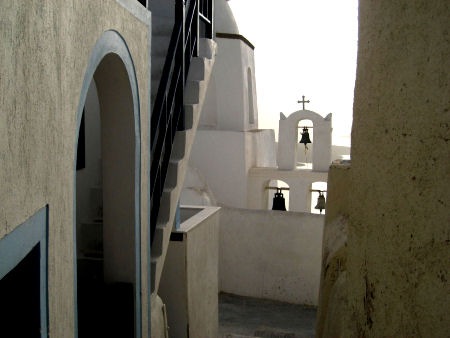 The Catholic church is not as popular as the Greek Orthodox church in Greece. 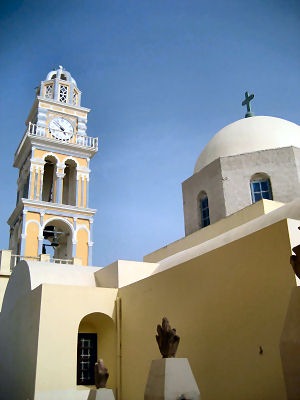 This sign above a tavern entrance caught my eye. I doubt that Socrates' philosophies are ever discussed in this particular tavern. 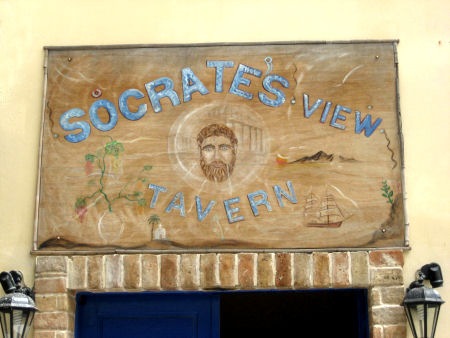 I stayed in Hotel Thira. This is a friendly and relaxed family-run hotel. Next door was a vacant lot with an attractive carpet of wildflowers. 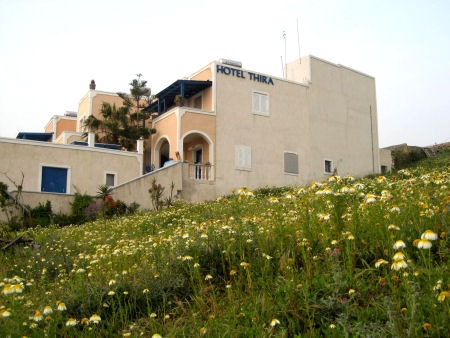 All those steps require extensive maintenance. The locals were complaining about the sandy dust blown in from Africa. When it rains, they have to run around and clean all the white walls. 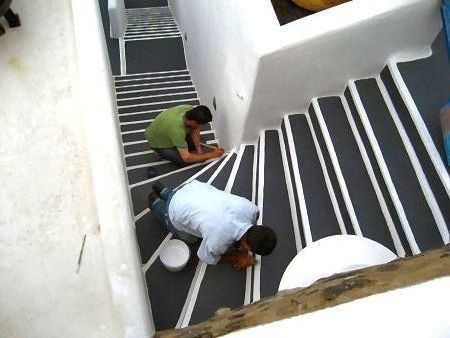 To go out to Nea Kameni (the centre of the volcano), you need to descend 350 m to the port on the water's edge. There are 3 ways to get down - by donkey, by cable car or by foot. I chose by foot for the descent and cable car back up. 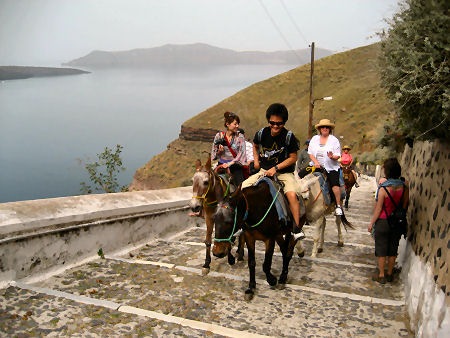 The information booth on Nea Kameni was a veritable Rosetta Stone, being presented in 6 languages. The first one is "EΛΛ" which is short for EΛΛAΣ, or "Greek". 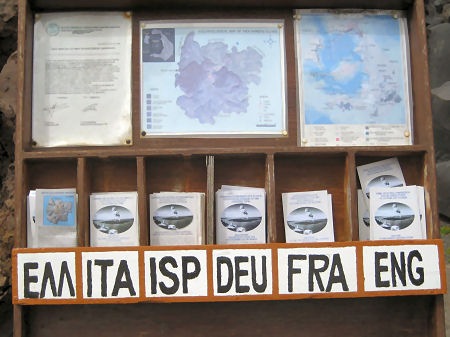 These were some curious new houses under construction on the northern end of Santorini island. The view over water was nice, but I'm not sure about those houses...

This is Oia (pronounced "wee-ya"), built on the edge of the northern tip of the island. The sunset is supposed to be good there but the sky was so hazy, it was a fizzer. 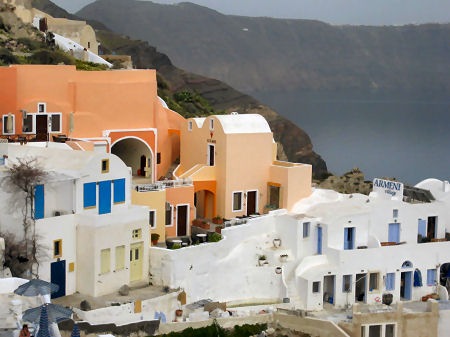 A small vessel heads into the setting sun. 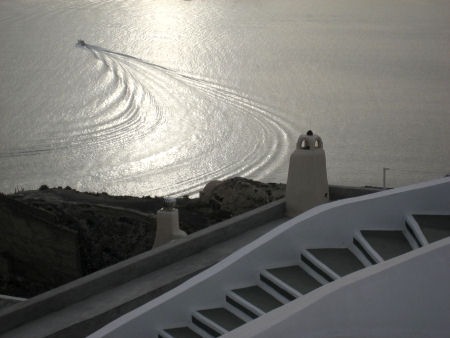 The preserved township of Megalochori is at the centre of Santornini's winegrowing area. My small rental car was barely able to squeeze through this alleyway. 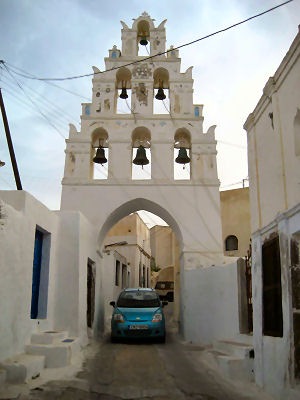 At the southern end of Santorini is Red Beach, named for the colour of the rocky cliffs. This church at one end of the beach looks rather like a ship from this angle. 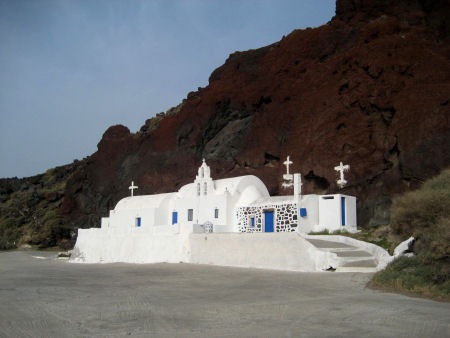 Back in Thira, I enjoyed the lights at dusk. 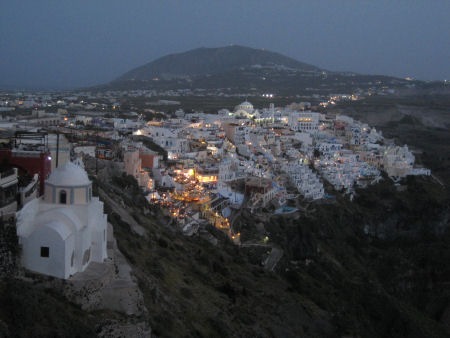 Santorini is well worth a visit. It has a delightful atmosphere and plenty of photo opportunities, even if the sky is uncooperative.

Geologists will love the rugged nature of the place and the evidence of recent volcanic activity is everywhere.

But you better be quick. They are expecting a new island to appear a few kilometers off Santorini in the next few years − and it could be a dramatic arrival.

Also, the next earthquake (or eruption) could well dislodge many of the houses and hotels that hug the sides of the caldera.