What did Newton originally say about Integration? 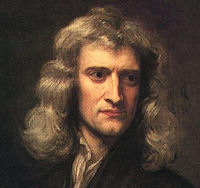 Most of us learn about math from modern textbooks, with modern notation and often divorced from the historical original. No wonder people think math is a modern invention that's only designed to torture students!

Isaac Newton wrote his ideas about calculus in a book called The Principia (or more fully, Philosophiae Naturalis Principia Mathematica, which means "Mathematical Principles of Natural Philosphy"). This was an amazing book for the time (first published in 1687), and included his Laws of Motion. 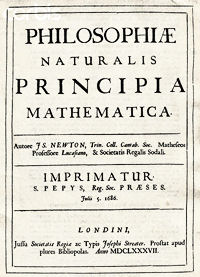 Cover of the Principia. [Source]

Newton wrote his Principia in Latin. It was common for mathematicians to write in Latin well into the 19th century, even though other scientists were writing (perhaps more sensibly) in their native tongues (or in commonly spoken languages like French, German and English).

Let's look at one small part (which he named "Lemma II") of Newton's work, from the first English translation made in 1729. You can see all of that translation here, thanks to Google Books (go to page 42 for Lemma II):

The problem below was very important for scientists in the late 17th century, since there were pressing problems in navigation, astronomy and mechanical systems that couldn't be solved with existing inefficient mathematical methods.

Some explanations before we begin:

This is the diagram that is referred to in the above text. 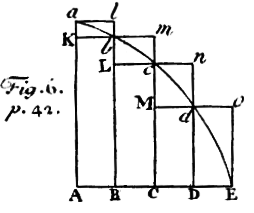 Let's go through it one concept at a time, with appropriate tweaks to the diagram. We are trying to find the area between a curve abcdE and 2 lines Aa and AE.

Below is the case where we have 25 rectangles. We can see the total areas of the rectangles is getting close to the area under the curve. Certainly the following ratio approaches 1, as Newton says.

This is a fundamental idea of calculus - find an area (or slope) for a small number of cases, increase the number of cases "ad infinitum", and conclude that we are approaching the desired answer.

You can explore this concept further (using an interactive graph) in the article on Riemann Sums.

This concept of finding areas of curved surfaces using infinite sums was not that new, since Archimedes was aware of it 2000 years ago. (See Archimedes and the Area of a Parabolic Segment.)

See the 28 Comments below.

28 Comments on “What did Newton originally say about Integration?”