Archimedes and the area of a parabolic segment 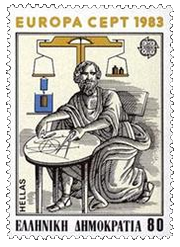 Archimedes was a Greek mathematician who lived 2300 years ago.

Many of his inventions and mathematical discoveries were years ahead of their time. It's amazing how inventive you become when you are constantly under attack from your enemies.

Finding the area under a curve had been a problem for many years. Fair trade depended (in part) on being able to work out volumes of cylinders and spheres. Archimedes worked out good approximations for the area of a circle and the value of π (pi).

The most remarkable thing about the following example of Archimedes' thinking is that it pre-dates the work of Isaac Newton and Gottfried Leibniz (the 17th century mathematicians who developed differential calculus) by around 2000 years.

I have a special interest in this kind of thing because the name of this blog, squareCircleZ, is derived from the historical attempt to construct a square with the same area as a given circle (called "squaring the circle").

The following discussion follows the technique as outlined by Archimedes in his Quadrature of the Parabola, using the "method of exhaustion", a pre-cursor to infinitesimal calculus. The concept came via Antiphon (5th century BCE), and Eudoxus of Cnidus (4th century BCE).

The area of a parabolic segment

A parabolic segment is a region bounded by a parabola and a line, as indicated by the light blue region below:

[See Parabola for some background on this interesting shape.]

I have used the simple parabola y = x2 and chosen the end points of the line as A (−1, 1) and B (2, 4). The theorem will work for any parabola and any line passing through that parabola, intersecting in 2 points. [Of course, Archimedes did not use the x-y co-ordinate system, since it was not invented by Descartes until the 17th century.]

Archimedes then located point C such that the x-value of C is half-way between the x-values of points A and B. He then constructed triangle ABC, as follows:

The way Archimedes achieved this result was to use the Method of Exhaustion, which involves finding the area of a curved shape by inscribing successively smaller polygons until the shape is filled. We can find the area of those polygons and hence the area of the curved shape.

We now construct another triangle by choosing point D on the parabola such that its x-value is half-way between the x-values of A and C, similar to what we did before.

Let's zoom in and see the result.

We do the same thing on line BC, by locating point E such that its x-value is half-way between C and B.

We can see already that if we add the areas of triangles ABC, ACD and BCE, we have a reasonable approximation for the area of the parabolic segment, but we can do better.

If we continue the process, we form 4 more triangles as follows:

There is very little 'white space' left and if we were to add the areas of the 7 triangles, we would have an even better approximation for the area of the parabolic segment.

If we kept going and added the areas of an infinite number of such triangles, we would have an exact area for the parabolic segment.

Then, considering the red triangles, they will be 1/8 the area of the light green triangles.

So if we call the area of the large pink triangle X, then the area of all of the triangles is given by:

We recognize that the expression in brackets is a Geometric Series, with common ratio r = 1/4 and first term a = 1. The sum of this series is given by:

[Archimedes used a geometric proof for this portion.]

So the total area of the triangles (which gives us the area of our light blue parabolic segment) is 4X/3, which is 4/3 the area of the pink triangle, as Archimedes claimed.

The thinking behind this solution is very similar to the ideas behind the development of calculus.

Let's use integral calculus to check the answer we obtained using Archimedes' approach.

So according to Archimedes, the area of the (light blue) parabolic segment will be:

As I said at the beginning, Archimedes' solution for finding the area of a parabolic segment is a remarkable result. Almost 2000 years before Newton and Leibniz formalized differential and integral calculus, Archimedes already had a good handle on the basics.

It's interesting (and dangerous) how knowledge can be 'forgotten' for thousands of years.

Go here to see an interesting English translation of Archimedes' Quadrature of the Parabola.

The graphs in this article were produced using Geogebra, the free computer algebra system. See my review: GeoGebra math software - a review.

See the 26 Comments below.

26 Comments on “Archimedes and the area of a parabolic segment”