I had the following exchange with a reader over the last few weeks.

It's long (over 2 parts), but if you want to understand summation notation, it's worth reading!

This post also demonstrates the Socratic Approach to math teaching, where the teacher gives space for the learner to figure things out for themselves.

The exchange was done entirely in Google Docs and I have just pasted it here.

Note how respectful Yousuf is. I don't mind helping him at all as he is willing to show his appreciation at every step. Sadly, not everyone responds like this.

My replies throughout are in bold.

Thanks for reading this sir, I greatly appreciate your kind support.

Sir, this is the very last question on that exercise on sequences. This one's a lot different and I've a feeling it's going to be a lot more difficult especially considering the way it's written.

find the value of n.

OK the expression's turned out kind of unusually, but just to confirm:

I don't understand anything about this particular expression and if it's got anything to do with that previous thing we did about those sigma equations, I have no idea what to do here sir!

Thanks again sir, I really appreciate your time 🙂

OK. First question - write out what this means:

This will help: Helpful revision

OK, next, what is

Go back to the first example, which you did properly. It said "start at a=1" at the bottom of the Sum sign, which you did. You substituted in 1 and got 1^2.

You stopped when you got to 5, since that is on the top of the Sum sign.

Mmmm....I first thought that we always start with 1, but it seems I'm wrong clearly.

We are getting somewhere, but it's not quite right yet.

1. There is no MULTIPLY in the question, so why are you multiplying?

2. The number at the top is 5, so that should be the last number.

Pls read my summary above about the things you did right before.

Sorry sir, but I have no idea. I'm always thinking we start off with a = 1 in all these sequences, but again I have no idea what to do here.

Right, I think the first term would definately be ...

This bit you said is quite correct:

And what you did above was correct, starting with (x + 1).

(3) As I have hinted several times, there is not (necessarily) 5 terms

Thanks for replying back sir 🙂

there should be 5 terms in the sequence shouldn't there???)

The textbook I have says this and also says if its infinity instead of 5, for example, then the sequence goes on and on. But the number above sigma essentially means there's a restriction to the number of terms in that sequence doesn't it??

But even then sir, if

Sorry sir, but this is the first time I've come across an expression of this kind and I'm sure it's covered in the pure algebra units after (actually I just checked in the books and it isn't)!

Sorry sir, but could you please explain what is meant by the part

and if you do substitute this into a, do you then always (including for all other related expressions under sigma) add 1 all the time??

The only thing I do have in the textbooks similar to this is this ... 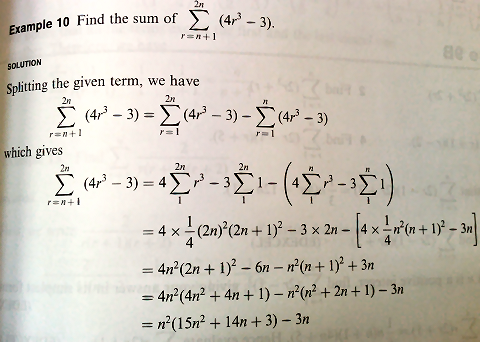 And still, I don't know what's going on.

Thanks again sir, and I'm really sorry I hope you can understand this is the first time I've come across something like this. The textbook has concentrated on an isolated value of a throughout.

No need to apologise! You are right - this is the first time you are coming across this.

But please realise - in the "real world" we come across novel problems and what we need to do is to apply what we already know.

That's what they are trying to do here - get you to apply what you know in a novel situation.

Your answer above is getting closer, but still not quite. You have added (x + 1), each time, not "1" as it should be.

I can understand why that textbook example didn't help at all!! Yet another case where they just assume you can figure it out.

OK - back to the problem.

It will only be 5 terms if you have a simple case like the one I gave you earlier. Only one variable is involved (a), and so there are 5 terms.

That's our process, whether we know an actual value for the first term or not.

Question - is there an "a" in my expansion above?

Now, try to expand these ones. I hope they lead you to enlightenment!

Were there 5 terms for each of the above? Did "a" appear in any of your answers?

The above 2 answers should be almost identical, except for the letters you use. HINT: There will be no "a" in the answer.

Now try this one again:

Thanks for reading this, and I'm sorry for not having replied back sooner.

NOT correct - you have not finished with a = 5. Why are there 5 terms in your series? I keep hinting there will NOT be 5 terms in the series!! (The start is correct)

The same condition would apply here also as said before.

NOT correct - you have not finished with a = 5, again. Why are there 5 terms in your series? (The start is correct)

The expression itself is saying that the first number, a, will be such that it will be +1 that of the first term, namely 1.

[NO - this is not what it is saying. Look at your correct patterns above!]

NOT correct - you have not started correctly, using the correct pattern from above. But yay - we don't have 5 terms in the series!!

Did I do those OK sir?

Thanks so much sir 🙂

In this example, what I did was that I substituted a = 2 as the first term, and then continued using the natural numbers until I reached a = 5.

But you didn't start with 2 above! What you wrote above is correct, but none of the following expansions is correct.

(I know this is going to be wrong sir) Does that mean it will appear as ...

Also, would the next one be...

OK since that is that done (hopefully right)...

IN all honestly sir, I still don't know what it's asking. Is this going to be an algebraic sequence if it's not numeric?

I know it's going to be wrong sir, but I honestly don't have any other clue what else it could be?

You are so close, but you can't seem to accept the idea of a variable number of terms. You also need to finish with the number at the top.

OK - try these. (And please, DON'T write out every term!!, and don't worry about finding a final answer as a single number. We are only interested in the expansion.)

I still don't get them sir, the ones for

The ones above should be ...

CORRECT!! All 3 of these are correct. Now we are getting somewhere.

In the 3rd one, it finishes with "n". We don't know how many terms there are, but the "..." just means keep going up to n. We don't know what n is - we need more information to find it.

Now it's the same deal when we don't know what the STARTING value is. We just start with that value involving x (like you did successfully above), do a few terms, THEN PUT "..." to indicate missing terms, then FINISH WITH THE TOP NUMBER (which in most of the above examples was 5.)

Now, would you like to try those expansions with x in them again?

Thanks for reading this and apologies for not having replied back sooner.

Right, I may get this wrong again sir, but does the following expand to...

Sorry sir, but I'm convinced the above are incorrect, but I've drawn from the previous principle.

I'm not quite sure if there is a pattern involving the first number (a = t or a = x) so I've assumed we start off with the first number as t or x and proceed therewith to the final number in the sequence, in both cases 5.

Thanks again sir for your kind help and support 🙁

Let's go back to this example. The proper expansion should have the first few terms and the last few terms, with "..." in the middle, like this:

Thanks for replying back sir.

Sir I know you might be thinking I've cheated above to not have put any values before 5 in each instance! But I'm not sure what goes after the "+...+". I was going to write t+n and x+n where n could be any number but haven't done so in knowing it's going to be wrong sir!!

I know from the expressions that ...

However, because a is an unknown value in both instances, we don't know what the number is so we start off with that and because the pattern follows natural numbers, we add 1 onto each consecutive term - until we reach the ending term of 5.

Thanks again sir and I'm sorry if it's frustrating!!! 🙂

The reason why I've put in (t+n) is because t is a variable value and we can't say whether it's a fixed numeric value.

I think the reason why we can write

in a way to exemplify 3 starting terms and the last 3 terminating terms including the final term is because a has a fixed value whereas in the expanded example, a is a variable value and could be any number so I can't work out sir how we can use three terms to exemplify the pattern before the final term.

I'm sorry again sir because using a variable initial value in these kind of sequences is something I've come across just recently (well actually on this question in particular!)

Thanks again sir and I'm sorry again for the inconvenience 🙁

like I wrote. Now the numbers before 5 will be?? There certainly won't be an "n" in there.

You have the beginning correct, now.

Continuation of this exchange...

See the rest of this discussion here: