Sketchometry is a great tool for visualizing math concepts. It's designed especially for tablets, but it also works well on laptops and desktops. Sketchometry is from the developers of JSXGraph.

According to the Sketchometry blurb:

Today dynamic mathematics software must be usable on desktop computers as well as tablets and other mobile devices. This leads to a platform independent design.

The new dynamic geometry system sketchometry allows the user to construct geometric objects and define their dependencies by simply drawing sketches of lines, circles, and points on the screen. A novel mixture of algorithms is able to interpret the user input and convert it into exact mathematical objects.

For example, you can draw a rough circle with your finger or mouse (as shown on the left) and it will snap to a real circle automatically. 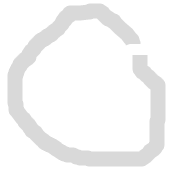 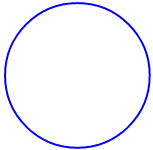 There is an indicator near the top of the screen which tells you what you'll get if you let go at that point in time:

Your original can be quite rough and yet it recognizes what you want. Neat.

The Help page shows the gestures you can use on a tablet to achieve various mathematical constructs, like triangles, perpendiculars, and "gliders" (where a point glides on a line or curve).

All of these worked fine on a tablet for me (except the sector, where I kept getting a triangle, and the "re-size circle" gesture just moved the circle).

There does not seem to be a "square" output option. It never came up in the indicator at the top. I imagine this is in the works.

The Help section has some example videos to show you what to do.

Sketchometry is in beta, so the following may not apply for the final version.

The designers have gone for a minimalist icon-based approach. Nothing wrong with that, but there should be a tool tip (the help box that pops up when you hover over an icon) for each icon on desktops, and some other indication for tablets.

The interface is, well, "mysterious". On my first visit, it was not clear that you needed to press a plus "+" button (tucked away on the lower right of the screen among other icons) to get started. Each time I've visited since, there have been more hints given (like a big "Start here" image, and more recently a few example screens which give you an idea what to do (except those examples didn't work very well on Chrome on PC, or on iPad for me).

I actually like mysterious interfaces because I like poking around and trying things out. However, most users like to know what's going to happen and what they are going to get for their efforts (what's in it for me?) and may need some more direction.

The "Help" link is hidden down the left-hand bottom corner and I totally missed it on my first few visits. (Help is traditionally placed at the top right, and that's where users are going to look.)

I would like to see a "Clear board" option. Currently you can "undo" or "delete" selected objects only.

This is a great tool and one worth investigating since it works on tablets, mobile phones and PCs (Windows and Mac).

The JSXGraph community is helpful, and I'm sure Sketchometry will develop into a very useful Web-based app.

Go and have a play at Sketchometry.

One Comment on “Sketchometry - geometry tool for tablets (and PCs)”